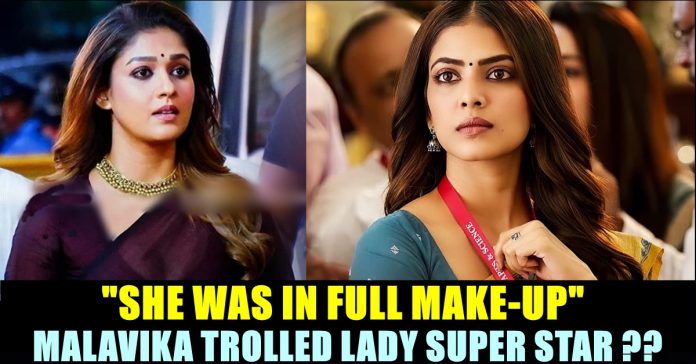 Malavika Mohanan appeared in an interaction with a private channel as a part of the promotion for her upcoming film “Master” in which she paired opposite to actor Vijay who is known for his huge fan base in Tamil nadu. She answered to many questions that was asked to her regarding her personal and professional life. While answering to one of the questions asked by VJ Parvathy, Malavika indirectly trolled Lady Superstar Nayanthara, believed netizens.

Malavika Mohanan, a recent sensation among youngsters, got an opportunity to pair with Thalapathy Vijay in her very second film in Tamil. Unlike other heroines, Malavika rose to fame through her photo shoot pictures that she uploaded in her official Instagram account. Being acted in the mega budget blockbuster film “Petta” of Rajinikanth, Malavika is also going to pair Dhanush in his upcoming untitled project which is going to be directed by Karthick Naren.

Throughout the interaction, Malavika shared about many things including how stressful was her first day shoot for “Master”. She even imitated her co-star Vijay and director Lokesh Kanagaraj. To Vijay Sethupathi, Malavika asked when he is going to do a film with her. Meanwhile, the anchor asked Malavika to point out one funny logic in Tamil cinema.

Answering to her question, Malavika said that there was a scene in a movie where a Superstar actress would be seen wearing perfect make-up in a hospital scene. “I have seen really big superstar actress, in a hospital scene, where she is almost dying, she is in full make up. With full eye liner, hair done, not one hair out of place and I am like “how can a person be in a dying situation with her lipstick in place”. Even if it is a commercial film, even if you need to look pretty, it has to look little realistic. That is like logic gone out of the window” Malavika said in the interaction.

On seeing this statement from the actress, Netizens came up with a speculation predicting that she is referring to a hospital scene in Atlee’s Nayanthara. In a scene, Nayanthara, after getting unconcious, would be admitted in a hospital. The next day, when Arya comes to meet her in the hospital, the actress would be seen wearing make up with lipstick on.

An Instagram user came up with a meme trolling actress Nayanthara and director Atlee after seeing the interview of Malavika Mohanan. Watch the video below :

Here’s the screenshots of the scene from the film “Raja Rani” :

Raja Rani is the debut film of director Atlee and the film helped Nayanthara to make her come back in Tamil film industry. In the film, she played the role of “Regina” who is a love failure facing issues after marrying a complete stranger. Nayanthara acting was received well by the audience and she received Film fare award and Vijay award for her performance in the film.

Comment your views on this statement of Malavika Mohanan !!