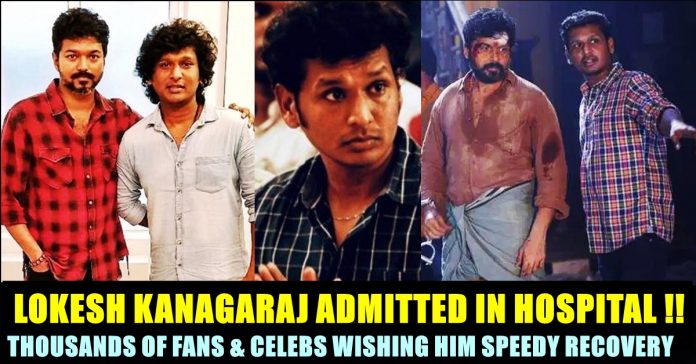 Followed by several politicians, sports personalities and film celebrities, young and emerging director Lokesh Kanagaraj who impressed audience with his filmmaking skills, has announced that he got tested for COVID 19 virus through his official twitter account. Along with thousands of fans, several colleagues of the filmmaker wishing the director a speedy recovery.

Lokesh Kanagaraj who debuted in the year 2017, grabbed the attention of Tamil audience through “Maanagaram”, a hyperlink drama set in Chennai city. During the final stages of the post production work of his second film “Kaithi”, Lokesh got an opportunity to direct actor Vijay, one of the very few highest paid actors in Indian film industry.

After impressing the “Bigil” star with his intriguing script, Lokesh Kanagaraj decided to cast the busiest Vijay Sethupathy in the antagonist role. While emerging filmmakers are in desperation to work with any one of these stars, Lokesh managed get both of them on board for his third film. The film which got released after 1 year of its completion due to COVID 19 outbreak, did well in the box office.

Now, the young lad was all set to direct his idol Kamal Haasan post assembly election. He was working on the pre production works of the film and is also rumoured to direct “Thalapathy 66”. Now, to our shock, the filmmaker has came up with a tweet saying that he got tested positive for COVID 19 virus.

“Hello Everyone! Writing this to inform all my friends, family & well wishers that I have tested positive for Covid-19 and have been admitted in a private hospital where I’m being taken good care of. Will be back soon & stronger! Until then, Lokesh Kanagaraj.” read the tweet of of filmmaker which was posted on Monday evening.

As soon as the tweet got surfaced in his twitter space, enormous number of fans came up with reply tweets wishing him a speedy recovery. Many celebrities also wanted him to come back soon after recovering. Check out some of their reactions below :

Get back stronger na 🤜🤛 https://t.co/ntoJlHyes7

Days ago actor Madhavan announced that he got tested positive for COVID 19 virus. Earlier, actors Amir Khan, Amitabh Bachchan, Abishek Bachchan, Malika Arora, Arjun Kapoor, Suriya, Tamannah are some of the notable actors who were got infected with the virus. Ranbir Kapoor and Kartik Aryan are in home quarantine as well. Cricketing icon Sachin Tendulkar also updated about himself testing positive for COVID 19 two days ago.