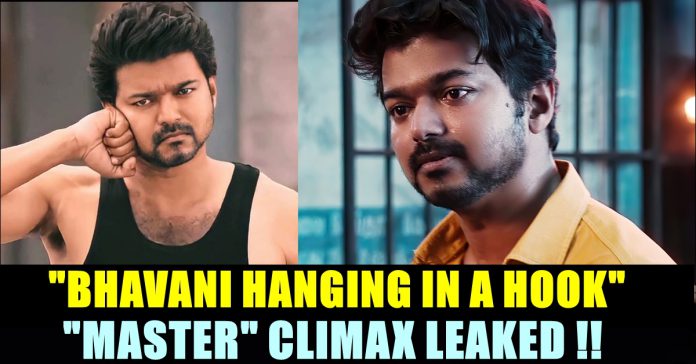 The most awaited film of actor Vijay “Master” is all set to release on theatres in few days with much expectation. Makers of the film started promoting the film by appearing in interactions and by releasing promos in social media platforms and Television channels. Fans of the actor are pumped up to witness the film in big screen with 100% occupancy in theatres. Several comparisons and speculations kept surfacing regarding the plot of the movie since the release of the teaser.

Director Lokesh Kanagaraj made it clear that the film is going to be a straight forward action film. Now, an image of the censor cut details is doing rounds in social media platforms and it is believed that the details of the film’s climax got unknowingly leaked through it.

“Master” was supposed to release during April month of 2020 and got postponed due to COVID 19 outbreak. Now, the makers have decided to release the film on 13th of January ahead of the Pongal festival. As soon as the official announcement was made, Lokesh has been appearing in youtube channels to promote the movie and the short promos started releasing.

“Master is a straight action entertainer. It is a good commercial film. It is not connected to fight club in any way. I have seen almost all the comparisons. We didn’t do such semiotics” Lokesh said while clearing the air on the comparison between “Master” and Hollywood film “Fight club”.

The film received U/A from the censor board and the details of the chopped scenes got surfaced in the Internet. Running time of the Vijay-Vijay Sethupathi starrer is 178 minutes according to the censor certificate. Now, while mentioning the chopped scenes in the film, the Censor board of film certification has mentioned about a scene where the character “Bhavani” hanging in a hook. “Bhavani” is the antagonist of the film and the role was played by Vijay Sethupathi.

The censor board also mentions about juveniles hanging in the flashback which denotes that the protagonist is killing the Antagonist in the same way he killed the children. Trimmed the visuals of hanging Bhavani in a hook in Shot Nos. 596 to 603.(Applicant can retain 2 shots in 596,597 and remove other shots).hanging shot of Juveniles in flash back to be kept for flash)(Reel 8)(18:19)(violence/ violence against children) reads the 20th point of the censor cut.

Here’s the full list of chopped scenes in “Master” :

Though it is not known whether it is the climax scene of the film, a number of fans who are eagerly waiting to witness the film in big screen got extremely upset on seeing this details being widely spread and we can also see many Vijay fans sharing it in social media platforms.

However, Lokesh Kanagaraj is known for his intriguing screenplay with simple plots. He kept the audience engaged with his tight writing in his previous films and the screen presence of Vijay and Vijay Sethupathi is going to be a treat for the fans of Tamil cinema.

Previous article“Aari Knows No Fear” – Evicted Contestant !!
Next articleActivists Got Arrested For Inaugurating Flyover Before CM !!

SHOCKER : “She Even Cheated Me For Money” – Meera Mithun’s Friend Opened !! WATCH VIDEO !!

If you are not living under the rock, you must have crossed at least one post against Meera Mithun of Tamil Bigg Boss show....