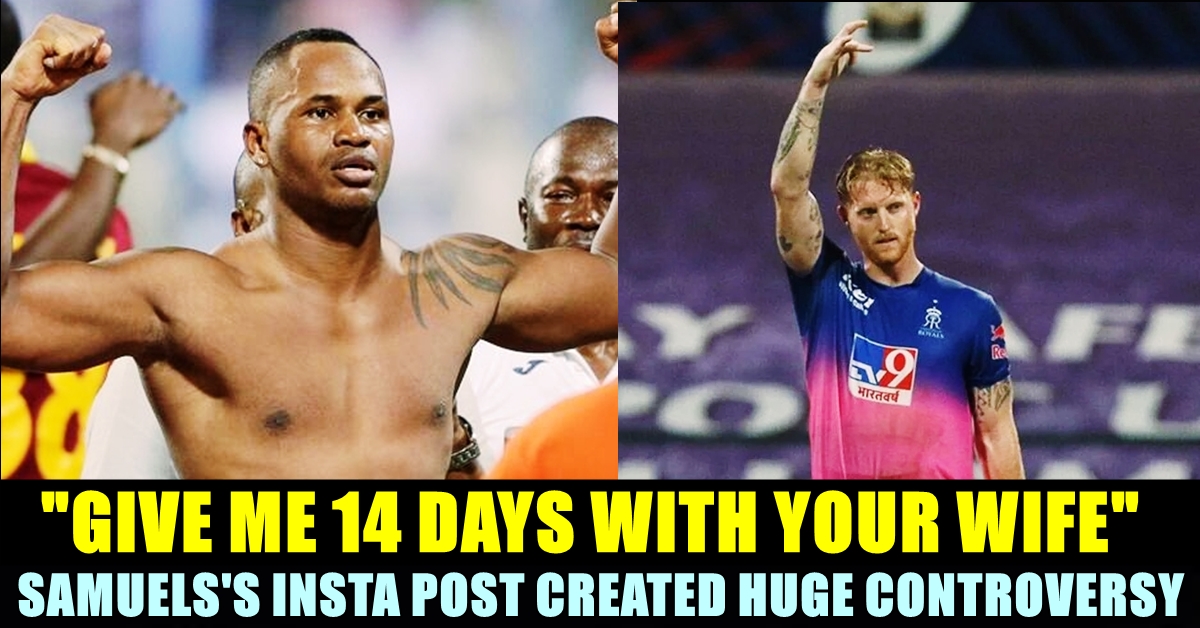 Ben Stokes who helped his team Rajasthan Royals to chase a mammoth total of 195 against an IPL team with the best bowling line up, found himself amidst an embarrassing state after making a comment of West Indies all rounder Marlon Samuels. The latter posted a couple of expletive-laden message in his official Instagram account to express his anger. It all started when Ben Stokes dragged Samuels name while explaining about his quarantine experience.

The England allrounder remained quarantined in the hotel rooms of Auckland and Dubai as part of the terms of travelling during the COVID 19 pandemic before representing Rajasthan Royals in the ongoing IPL tournament. He spent 14 days in isolation upon returning to New Zealand in August to be with his father Ged, who is battling brain cancer.

He was again forced quarantine for 6 days upon arriving the United Arab Emirates prior representing Rajasthan Royals. In a podcast with TMS, Ben stokes narrated the worst experience he had while spending the quarantine. “You get off the plane, get your bag, walk out and get told what hotel to go to. There’s no choice, it’s pot luck whether you get a good hotel or not. The government have chosen certain hotels to be the quarantine hotels.” he said in the podcast.

“I posted a few Instagram stories and some of the England boys were messaging me asking what it’s like and I was saying it wasn’t the most enjoyable thing you ever have to do, I wouldn’t wish it on my worst enemy.” the cricketer added.

Further he revealed what happened when he said the same thing to his brother. “I text my brother saying the same thing, and my brother asked: ‘You wouldn’t even do that to Marlon Samuels?’ I said ‘no, it’s that bad’ – that’s how tough it was.” Stokes said.

The rivalry between Stokes and Samuels started when the latter mocked after dismissing the former during day three of a test match. He saluted to send Stokes off to the pavilion. The pair clashed again in the finals of the 2016 T20 world cup. After winning the match, Samuels celebrated in front of Stokes. In his autobiography “On Fire: My Story of England’s Summer to Remember”, Ben described Samuels as someone who “lacks respect”.

Now, after knowing about the comments made by Ben, Samuels came up with a couple of Instagram story, slamming the cricketer. He also went beyond the limit and dragged the cricketer’s wife in a derogatory manner. He even slammed Shane Warne and some of West Indies cricketers.

“no white boy could diss me in the sports and no get back diss look at this btch still thinking about me give me 14 days with you wife turn har into Jamaican in 14 seconds mate none of yall knows me that simple means it’s my f**ing superior skin tone,” he wrote in his story.

“icc cricketing world ben btch stokes Shane btch warn and a few btch west Indians cricketers who sell out sextillion7thpower Ps nothing to fck with my army bigger and we richer,” his second story read.

During the Big Bash league, Samuels and Shane warne had a rift between them due to several ugly verbal spats on field. These stories of Samuels have shocked the entire cricketing fraternity with fans reacting in various ways.