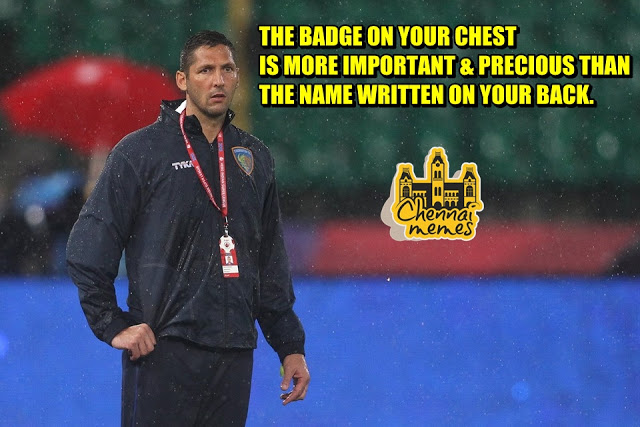 A team is not just defined by it’s players. Their talents need honing and guidance and needs to be used it in a strategic manner to achieve the deserved results. That is where the coach steps in.
Chennaiyin FC , started of the 2015 season , being in backfoot with losses to Atlético de Kolkata, Delhi Dynamos FC and NorthEast United FC , which put CFC in the bottom of the table. The journey ahead seemed impossible and the spirits of players and fans alike seemed to slowly wither away with each passing match.
But among such adversities, few never lost faith in CFC. Pioneer among them , was Marco Materazzi.
Mendoza , in a pre show talk told how Materazzi had been an inspirational figure for the entire team which kept them going.  He made it clear that, though the players are from different parts of the world., they represent Chennai is spirit and soul in the field!
“THE BADGE ON YOUR CHEST
IS MORE IMPORTANT & PRECIOUS THAN
THE NAME WRITTEN ON YOUR BACK.”

After this great motivation by Marco, it was a non stop run for CFC. They mowed down the opponents like a runaway train , laying waste to FC Goa, FC Pune and Kerala Blasters FC. They dragon had truly woken up and it was back with a vengeance…all thanks to the ever optimistic Materazzi!
When Chennai was under the grasp of heavy downpours and was submerged in floods, the fans and players alike wanted CFC to win this one for everyone in Chennai! Their solidarity materialized as an overwhelming support for CFC even from the opponent teams.

It was just a matter of time before CFC would finally have the ISL cup within their grasp. Marco once again proved that his resolved was made of steel and that neither the floods nor the opponents can stand in the way of the much awaited victory.

The final showdown with FC Goa brought in the true grit of the CFC players who were fed with character, strategy and sheer will by Marco and his never say die attitude. As promised they delivered it for all the Chennaivaasis!