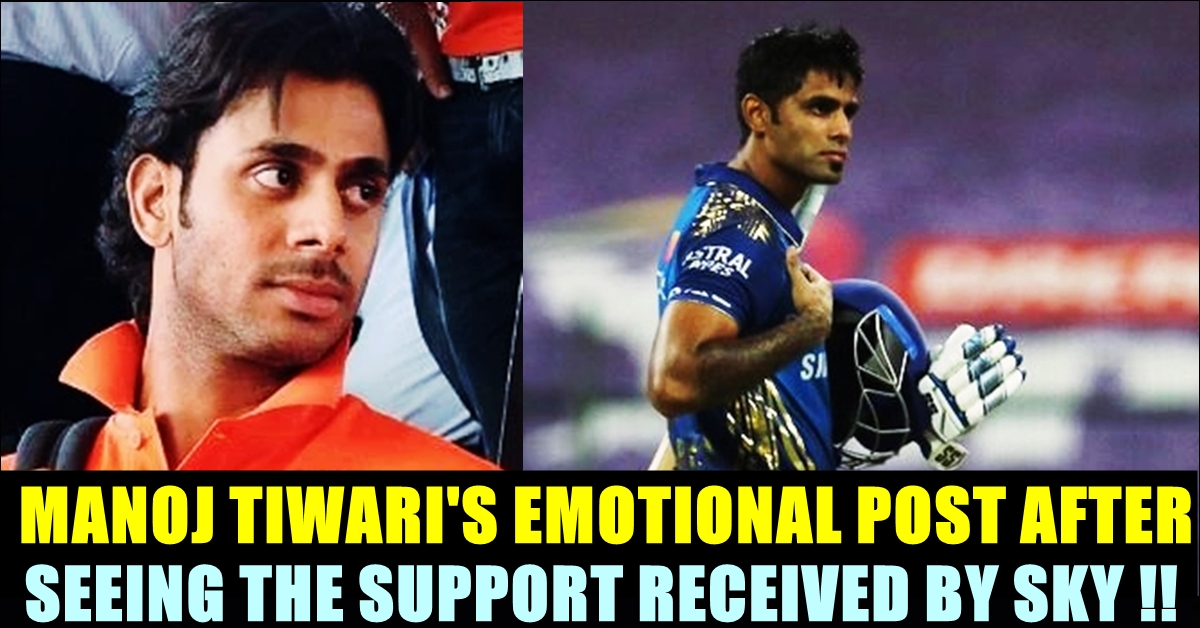 Manoj Tiwary, former Indian cricketer who represented India in One day internationals and T20 cricket, expressed his emotion on seeing the support received by Surya kumar Yadav from Ravi Shashti, coach of Indian cricket team. Manoj said that he feels Ravi Shashtri could have been the coach of India when he scored a century for the team and added that Surya would feel happy on seeing his tweet.

Day after he got rejected by the BCCI for the Australian tour, Suryakumar Yadav smashed a match winning knock for Mumbai Indians and made a solid statement. He who came as an one down batsman to chase 164 runs posted by Royal challengers Bangalore, proved that he could play at any position with ease. He scored 75 runs from just 42 balls with a strike rate of 183 +. He also received the man of the match award for his splendid performance.

Surya Kumar Yadav who has been performing well in the IPL tournament for past few years, hasn’t got a chance to represent the national team yet. He who is being dubbed as “Indian AB DE Villiers” is known for his consistency and has a very good first class records as well. On the wee hours of the night when BCCI announced the squad without him, SKY uploaded a post with his family and said they are his life.

Wishes from all over the Internet are pouring for the cricketer for the sensible knock he played. Cinema celebrities, cricket experts, former cricketers and commentators were posted tweets lauding the cricketer for his innings. Indian coach Ravi Shashtri also posted a tweet appreciating the 30 year old. “Surya namaskar. Stay strong and patient” he wrote in his tweet and boosted the confidence of the upcoming talent.

This tweet from Ravi gained a wide reach with nearly 50,000 people liking it and thousands of others sharing it. Manoj Tiwary, a 34 year old cricketer who couldn’t find a place in IPL tournament, wished Ravi was the coach when he lost his place in Indian cricket team despite of scoring a century. He added that Surya will be happy on seeing his tweet.

“I just wish u were the coach of Indian team during the series where i scored Hundred points symbol .. Your message like this would have surely helped my international career. Seeing this tweet of urs #Surya will be happy” his tweet read.

I just wish u were the coach of Indian team during the series where i scored 💯 .. Your message like this would have surely helped my international career. Seeing this tweet of urs #Surya will be happy 👍 https://t.co/9vvVSkiBtT

In the year 2011, Tiwary played the 5th ODI against West Indies in Chennai and scored a 125 ball century and was named man of the match for his unbeaten innings. Even after the match winning innings, Tiwary was made to sit in the reserves for 14 successive matches following the century. He represented Kolkata Knight Riders, Kings XI Punjab & Rising Pune Supergiants in the Indian Premier League.

Rajinikanth’s Statement About The “Leaked” Letter !!
Woman Cheated Doctor By Making Him Believe That “Aladdin Lamp” Is Real !!
Advertisement