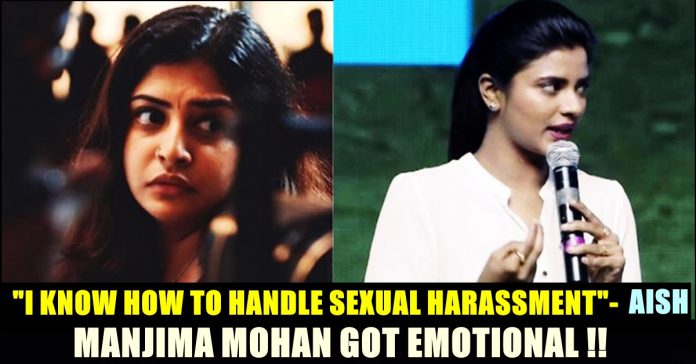 “I look up to a very few people in my life and she is definitely one among them. Thank you for being the wonderful friend you are. Keep rocking babe “ read the tweet of Manjima Mohan who got introduced to film industry through “Oru Vadakkan Selfie” with Nivin pauly.

I look up to a very few people in my life and she is definitely one among them. Thank you for being the wonderful friend you are. Keep rocking babe ❤️@aishu_dil https://t.co/jZXKLh7yBH

“hey thank u so much manjima … love u always” Aishwarya replied.

hey thank u so much manjima … love u always

Shanthanu said that he got goosebumps while seeing her speech. “Goosebumps aishu Keep moving ahead .. positively” he wrote in his tweet whereas his wife Kiki Vijay wrote “Loved ur speech “ to appreciate her.

Thank u brindha mam .. U have been support right from d beginning.

Actress Lavanya Tripathi who appeared along with Sasi kumar in a movie named as “Bramman” also lauded the speech of Aishwarya.

After Nayanthara, Aishwarya Rajesh is the only heroine in Tamil film industry who manages to get opportunities to play lead role in female oriented movies. The actress says that she is currently working as lead actor on 6 to 7 female oriented movies after the success of her “Kanaa”. While sharing about her journey, Aishwarya Rajesh says that she was brought up by her single mother as she lost her father when she was 8 years old.

In her speech, Aishwarya Rajesh shared about many things including how she started her career as a sales girl to Tv serial actress to one of the top actresses of Tamil film industry.

“They rejected me for my color, my complexion, the way I look, my personality and for even talking in tamil. Few directors even said to my face that I am not heroine material at all and offered few small roles.” says Aishwarya who reveals that she was offered to play a role opposite to a comedian by a well known director. But the actress turned down the opportunity as she was looking to play as lead.

Watch the video of her speech below :

After 2 years of struggle, Aishwarya Rajesh got the opportunity to play a small role in a Pa.Ranjith’s Attakathi which got her the face recognition and few more opportunities in films such as Rummy, Pannayarum Padminiyum etc. “But the one film that gave me the break was “Kaaka Muttai”in which I played the role of a mother of two children.” she says. Despite becoming a huge hit, Aishwarya says that she didn’t get an opportunity to play opposite to big heroes for nearly 1 year. “I got appreciated by high profile directors and actors but no one offered me a role opposite to big heroes” says Aishwarya who says that “Kanaa” made her to act as hero for her own films.

“Kanaa changed everything. It gave me so many awards and so many big things in my life. I have started acting in many more female centric films that I am currently having 6-7 films now in which I am playing the lead.” the actress says who wants every woman to stand for herself instead of depending on someone else.

Previous articleHussain Converted Manimegalai Into A Muslim ??
Next article“This Is Why I Quit Cinema”- Kalyani Opens !!

Most recently Bigg Boss conducted a task asking contestants to write a letter to their loved ones and read it to the audience. Almost...