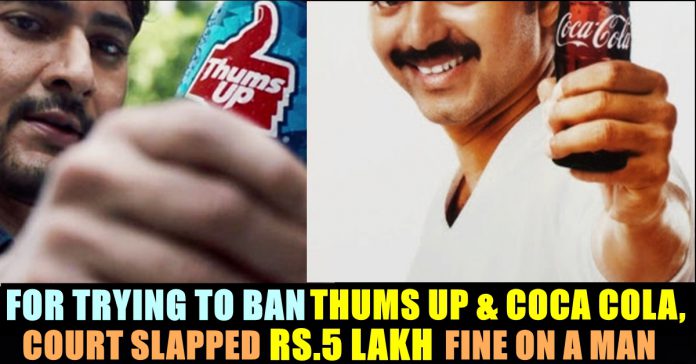 A man who wanted to ban Coca-cola and Thums up in India permanently, ended by receiving a penalty from the Supreme court. For a very long time, there is a wide belief among people that these drinks are causing damage to our health and affects the economic state of our country. Many insisted on drinking soft drink that are made in India. Now, The Supreme court on Thursday dismissed a “PIL” by a social worker seeking ban on sale and use of Cocoa cola and Thums up. He, in his plea, said that these soft beverages are detrimental to health.

The Supreme court rejected the petition and imposed exemplary cost of Rs. 5 lakh on the petitioner, adding that the petition has been filed for extraneous reasons. It also questioned the man’s counsel as to why two specific brands in particular were chosen to be the target of the proceedings. The penalty amount of five lakh rupees should be deposited within one month with the apex court registry and disbursed to Supreme Court On Record Association.

The petitioner named as Umedsinh P Chavda has invoked jurisdiction of the court under Article 32 of the Constitution through his petition, which appears to be abuse of the process of law, said the bench headed by Justices DY Chandrachud. The bench further added that the petitioner has no technical knowledge on the subject.

“Consequently, besides dismissing the petition an order directing the imposition of exemplary costs is necessary. We accordingly dismiss the petition and impose costs quantified at Rs 5, 00,000 on the petitioner. The costs imposed shall be deposited in the Registry within one month and shall be disbursed to the Supreme Court Advocates-on Record Association (SCAORA),” the bench added.

Apart from seeking ban on the products, the PIL filed by the petitioner asked government to issue a notice asking people not to consume Coca cola and Thums up. It further asked centre to submit a complete analytical report on scientific approval by scientist in providing license of sale and use of such liquids, according to reports.

Previous articleSuper Singer Divya Narrated How She Got Robbed !!
Next articleGodman Who Kissed People To Cure COVID 19, Died !!

Not knowing what to do in this lockdown restriction, most people who has nothing to do anything productive in their homes are glued to...