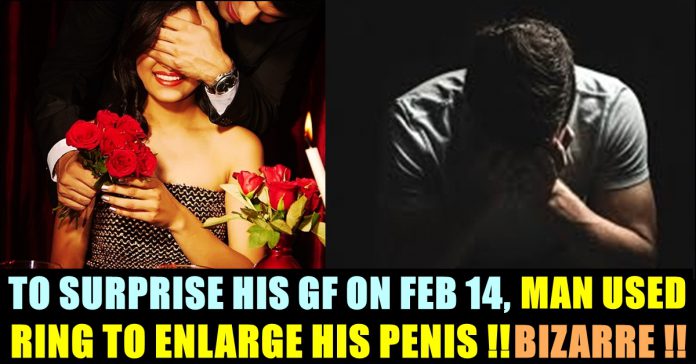 Man Tried To Enlarge His Penis By Using A “Ring” To Surprise His GF On Valentines Day !! Ended Up In Hospital

In a bizarre incident that took place in Bangkok, Thailand, a man tried to enlarge the size of penis by using a ring to surprise his girlfriend on Valentines day. Unfortunately, he ended up in hospital after the ring got stuck in his private and he couldn’t remove it. After his penis started swelling with the ring attached to it, the man rushed to a hospital and removed it successfully with the help of the doctors. Doctors expressed their sadness while talking about the pain the man went through while removing the ring.

After believing that putting his genitals through a nut would increase the size of his penis, the unidentified man used baby oil to slide a ring through his penis. The metal he used was 3 cm wide which is 1.2 inches and he reportedly took it from his tool box. He believed that this method would strengthen his penis by forcing blood into the glands.

His penis started swelling the next day and he experienced immense pain, says reports. When he tried to remove it himself, his efforts went in vain. Interacting with the media, he reportedly feared of getting his penis amputated.

“I was terrified that I would need my penis amputated. It had swollen so much that I thought it would burst” he reportedly said to news portals. After he found out that the metal ring got stuck in his penis and he couldn’t remove it, the man rushed to the hospital after calling the emergency services on Saturday afternoon. The incident of himself slipping the ring through his penis happened on Friday morning.

The ring jammed around the base of his penis for more than one day and the Paramedics took him to a hospital in the Thai capital. After a 60 minutes of nerve racking minutes, the doctors managed to remove the metal from his penis without causing a damage to his skin. It is reported by the rescue volunteers that the man cried in pain when one of the doctors slid a thin metal sheet between the nut and his skin to protect it, while another grinded with a spinning steel cutter.

Doctors also used pliers to grip and bend the nut to remove the metal from the man’s private part. Antibiotics and anti-inflammatory cream were given to him to reduce the swelling. “This is one of the strangest cases we ever have encountered. Most of the times it’s only people getting their fingers stuck in a ring, so it was surprising to see him getting his penis stuck with a ring” Pong, one of the rescue volunteer who went to his house said.

“We knew that cutting the nut wouldn’t be a problem, as we used the same technique with finger rings, but we were just worried about the pain he would be experiencing while removing it” he added. The Sun reported that the man couldn’t make it to the date that was planned with a girl friend on valentine’s day. However, doctors informed that the incident didn’t cause any permanent damage in his penis and added that it would function normally after a week’s rest.

Previous articleEmotional Post Of Keerthy Suresh’s Elder Sister !! Check How The Actress Reacted
Next article“It Is Because Of Murali Vijay” – Ashwin On Kohli’s “Vera Level, Vera Level” !! MUST WATCH

Vanitha Vijayakaumar who is currently involved in analysing the season 4 of the BIGG BOSS show, made a shocking revelation about an incident that...