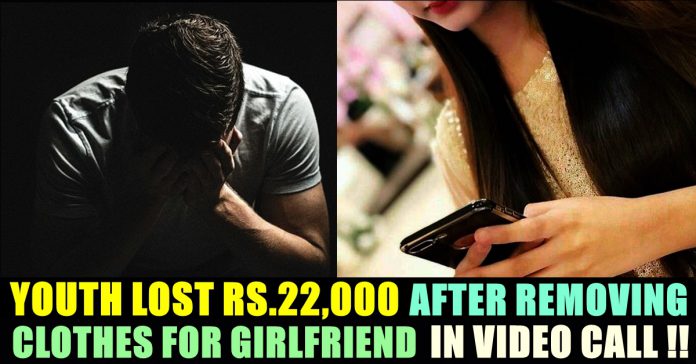 In a bizarre blackmail case registered in Bangalore, a 26 year old youth approached police after losing Rs.22,000 for stripping naked in whatsapp video call. Ravi (name changed) accused his Whatsapp girlfriend for extorting the money from him. Due to the lockdown crisis, couples are forced to interact only through video calls as they are advised to maintain social distancing by the government.

Ravi who is living as a paying guest at his house found himself alone after his roommate left for home town due to COVID 19 outbreak. He became friends with a girl on Whatsapp who identified herself as Nisha from Kerala. She reportedly told him that she works in a call centre in the city.

The victim, in his police complaint to the Whitefield police, had said that his girlfriend Preethi asked him to talk to her about “hot topics” over phone after saying that she likes his boldness. “During a chat last week, she told me that she wanted to see me naked. Initially, I refused but she said that she would also strip after I remove my clothing” Ravi told the police.

Ravi, believing Nisha, stripped his clothes in the video call only to find her disconnecting the call without keeping her word. After that incident, Nisha switched her phone off and Ravi couldn’t reach her in any way.

On Sunday, Ravi received call from an unidentified person claiming that he had his nude video and demanded Rs. 50,000 from him to delete the video. The anonymous person threatened Ravi to upload the video on the Internet platforms if he fails to pay the money.

After an intense negotiation, both Ravi and caller agreed on Rs.22,000. The victim sent the money through online. However, the miscreant again called and demanded more money which made Ravi to realize that he will be blackmailed forever if he pays again.

As a result of the blackmailer’s repeated calls, Ravi approached police and registered a complaint. In this digital era, with the development of technology, crimes related to the same is increasing in daily manner. As the internet and smartphone became easily accessible, it is high time every individual to be aware of the culprits. This incident created alert among the youngsters of both the genders not to involve in such activities with the strangers.