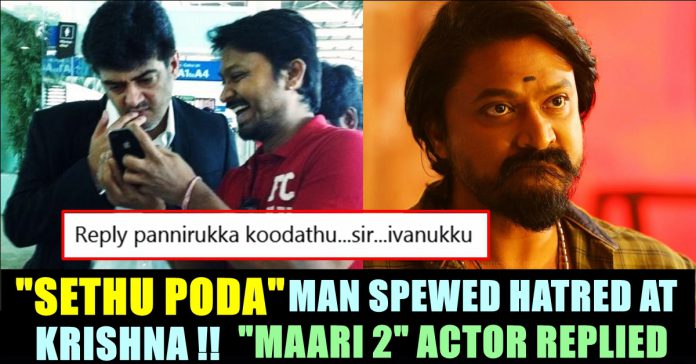 Krishna, director Vishnuvardhan’s brother and actor who is known for appearing in films such as “Kazhugu”, “Maari2 “, “Kattrathu Kalavu” became a victim of a mindless troll in twitter. However, the actor didn’t shy away from giving it back to him. His reply comment to the man, was lauded by his followers who awed the actor’s patience and tolerance level.

Krishna is pretty much active in the micro blogging social media site. Having nearly 6 lakh followers for his account, he would also interact with his fans and followers often. Most recently, he came up with a selfie post of himself. with a caption saying that he got bored to the core and asked his followers for suggestions on what to do.

“Vere level bored I am… Yenna pannalaaaam” his caption for the post read. Check out his post below :

Krishna who saw the tweet, decided to give it back to him and wrote “I wish u a good life bro ….. ungaluku bore Adika kudadhunu na kadavule vendikuren” (I pray to God that you should not get bored in life) said Krishna, referring to his own comment. Krishna indirectly mocked the sanity of the user, denoting that he would kill himself if he gets bored in life.

Check out some of the reactions to this reply of Krishna :

On the work front, Krishna who was last seen in Kazhugu-2, is going to appear in films such as Graghanam, Thirukural and Picasso. Comment your views on the way Krishna handled him !!

Previous articleCheck How Fans Are Reacting After Knowing That The Girl Appeared In “Soorarai Pottru” Is A Real Pilot !!
Next articleSushant Singh Rajput Fans Slammed Ranveer After Seeing This Advertisement Of Him !! Company Clarifies

The reception Suriya has been receiving after playing a cameo in Kamal Haasan's "Vikram" is immensely positive. In twitter, hashtag "Rolex" is trending with...