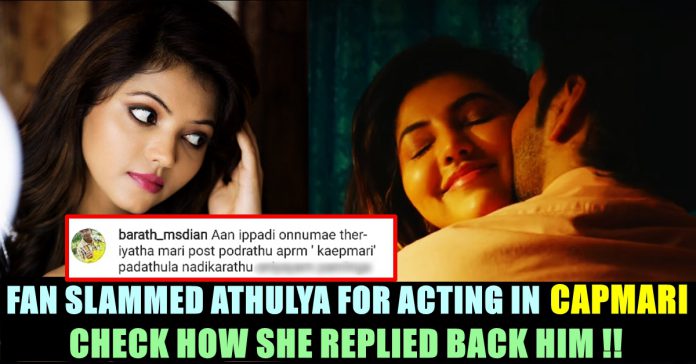 The trailer of actor Jai’s “Capmari” released on Sunday and shocked the fans of Tamil cinema for its adult content and double meaning dialogues which took place in the trailer cut. What’s more shocking is that the credits of the trailer says that it was directed by S.A Chandrashekar, ace filmmaker and father of actor Vijay.

The film which was given “A” certificate by censor board has actor Jai, Athulya, Vaibhavi in the lead roles. The trailer suggests the audience that the film is going to be a romantic comedy about a man who got married to two women.

watch the trailer below :

This trailer which went viral as soon as getting released, receiving widespread outrage for its content. Meanwhile actress Athulya, who is known for her previous films and for her social media existence, released a video in her official Instagram account.

Watch the video she posted below :

Whenever I am with my family , the child in me it will come automatically especially with my dad 😂 Diwali throwback video with @ravivarma7883 😍😍 that Thuppakki owner is not me 🔫🤪#kulatheivamtemple #family #daddysgirl #daddaughterlove ❤️#90skids

On seeing this post, many of her followers reacted to it and reached more than 3 lakh views so far. One of a follower of Athulya named as Barath Msdian, questioned the actress for behaving like an innocent in Instagram. “You are posting such videos here like an innocent but acting in films like “Capmari”. ” the follower said in his tweet.

Here’s the screenshot of their conversation :

Few other followers also commented to the post and Athulya replied to few of them. Check out some of their reactions below :

After making her debut with Kadhal Kan Kattudhe, Athulya has gone on to act in films including V. Z. Durai’s Yemaali and Samuthirakani’s Naadodigal 2. She has a very strong fanbase in social media for her cute looks and expressions. Athulya has also shot for Ramprakash Rayappa’s crime-thriller Suttu Pidikka Uttharavu, where she will play the love interest of Vikranth Santhosh’s character.

What do you think on this replies of Athulya ?? Comment your views below !!