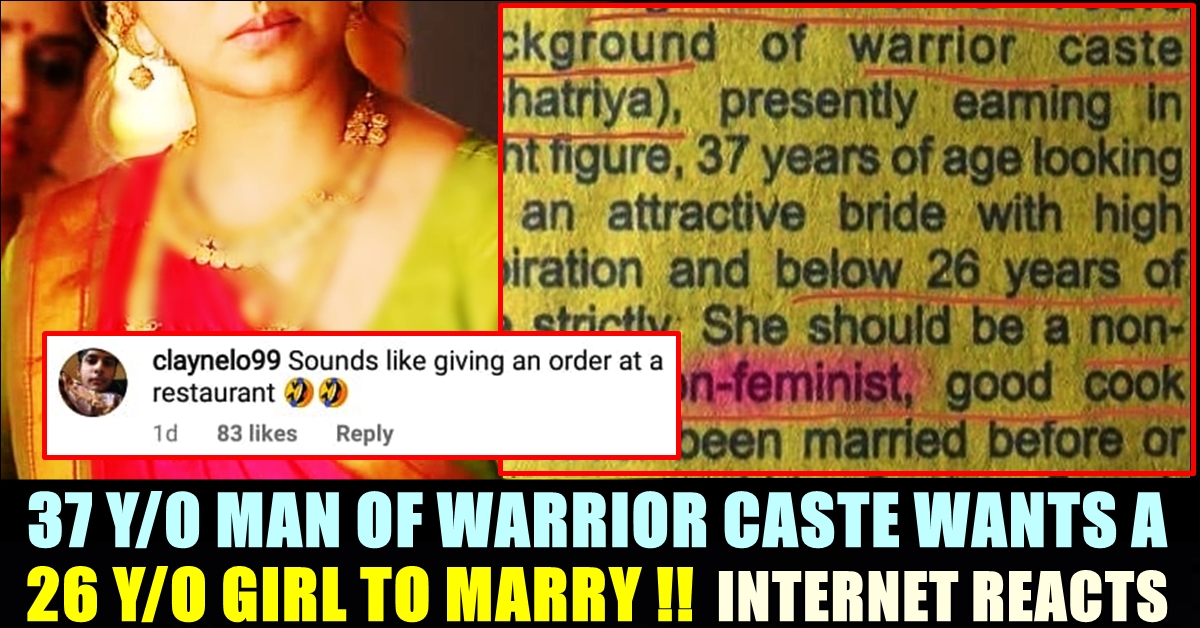 Getting the names registered in matrimonial sites and giving advertisements to news papers are highly believed as two of the best ways to find grooms or brides in our country, it seems. In order to get a partner as per their expectations, people would advertise themselves by providing their personal details such as name, age, job, location and also would mention their requirements in the advertisement. One such citizen who introduces himself as a man who belongs to warrior caste, grabbed the attention of the Internet users for his peculiar expectations. The print advertisement he provided, most probably to a local newspaper, got captured, spread and is being trolled, mostly by girls.

The Mysore based bachelor says that he owns an International export business and is earning in eight figure currently. The 37 year old who claimed himself as “young”, strictly wants a girl who is aged below 26 years. He also makes sure that he belongs to warrior caste (Kshatriya) with Rig and Atharva Vedic background. In his further requirements, he said that wants his bride to be a non-smoker and non-feminist with attractive looks and high aspirations. He also wants her to be a good cook with no children.

“Caste, Creed, Nationality and Religion, no bar. No dowry required. Please email a short biography and recent picture of the bride” his note read.

This post went insanely viral in the social media platforms with people raising various kind of questions against the one who published it. Many asked why he is afraid of feminists while being a man of a warrior caste. Others questioned his expectation of having a girl as wife who is 10 years younger than him. “At 37 when he consider himself a young bachelor why don’t he marry 37 year young spinster? Hypocrite ,pity his bride” said a twitter user. On seeing him demanding a girl with high aspirations, a twitter user asked “High aspirations just to kill?”

AT 37 when he consider himself a young bachelor why don't he marry 37 year young spinster? Hypocrite ,pity his bride

Warrior is 37..but girl below 26 strictly.. Everything about this warrior is wrong😑

Actors Donated To Thavasi & Wants Him To Make A “Come Back” !!
Surya Kumar Yadav Finally Opened On The Rift Between Himself & Kohli !!