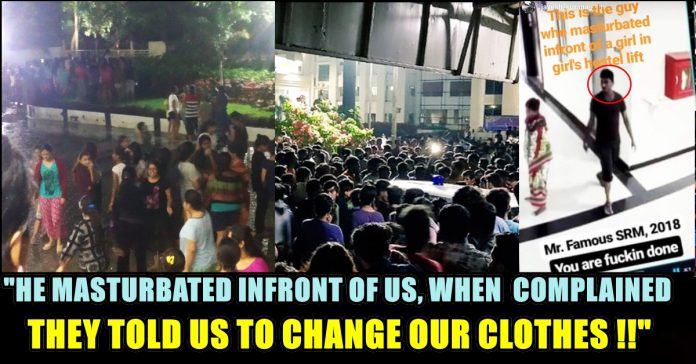 Students of SRM University at Kattankulathur area in the outskirts of Chennai staged a demonstration inside the  campus since yesterday night, alleging inaction by the administration on a sexual harassment complaint by a girl student of the university.

The agitation started on Thursday evening continued it till around midnight, alleging that a male worker on campus had sexually harassed a female student in an elevator.

These colleges talk big but still fail at the most basic of things. Protection of their student and their well being should be the highest priority. #SRMUniversity pic.twitter.com/GT9HhFHmFS

SRM University Vice Chancellor Sandeep Sancheti, however, denied the allegations of inaction and said the administration would look into the complaint.

“Students are discussing with us. Whatever the matter is, it will be taken care of. If there is a matter, it will be inquired,” Sancheti told.

To spread awareness, we are uploading the image of the guy! #SRMUniversity pic.twitter.com/iYNeK2l8vz

According to a third year software engineering student who took part in the protest, a second year undergraduate student of the university was allegedly sexually harassed by a male sanitation worker inside a women’s hostel lift on Thursday afternoon around 3 pm.

“The man masturbated in front of the woman student in the hostel lift, following which she reported the issue to the authorities,” the student told.

According to another protester, the hostel warden, with whom the student had raised the issue, allegedly delayed access to the CCTV footage of the elevator and the registering of a complaint by over two hours.

“The employee was identified by the student in the CCTV footage. However she was asked to stay mum about the incident by the authorities,” the protester said, adding that the hostel authorities allegedly blamed the victim.

The issue in #srm about harassment
A maintenance guy jerk off in front of a girl in the elevator and refused that girl to go out of the lift #SRMuniversity #Chennai #SRM pic.twitter.com/2h4EiTlA5k

Local police officials who reached the protest spot told PTI that the protesters dispersed after assurances from the university administration to look into the matter.

It is reported that more than 1500 students were present in the protest at midnight where half of them are girls. According to Indian express, S Mythili, Director of Student Affairs, said the management terminated the worker against whom the allegations had been made. “We have sent him out, but we can’t take further action until there’s more clarity over the issue,” she said.

As soon as the protest staged this issue grabbed massive attention from social media. Check out some of the videos and posts here :

This happened in #SRMUniversity today evening in a girls hostel. Plz RT as the hostel authorities aren’t allowing us to even lodge a formal complaint. pic.twitter.com/tH1GCSnAY5

BREAKING:2nd Year Girl Sexually Abused By A Worker Inside Hostel Elevator In SRM University.Students Protest As College Is Trying To Suppress The Matter To Save Its Image. Warden Allegedly Blamed The Girl For Wearing Short Clothes. #Chennai #SRMUniversitypic.twitter.com/gZagApYIfG

when people in positions of power in educational institutions fail to fulfill their basic responsibility towards their students, the students will take matters into their own hands no matter how hard you try to stop them. SHAME ON YOU SRM!! #youhadonejob #srmuniversity

The management at SRM is making fun of victim and her friends. Vice chancellor nurture such cheap mentality with which he leads our college. #srmuniversity #molestation#justice@the_hindu @CPMumbaiPolice @amazonIN @SkyNews @BBCBreaking @IndiaToday @TheQuint

What happened at SRM University today is extremely horrifying, its high time people get their mentality right. We want justice. #wewantjustice #srmuniversity

Epic shit going on in #SRMUniversity, when will educational institutions of India learn? #ShameOnSRMU

Shame on you, #SRMUniversity. You’ve made it clear that your reputation is more important to you than the safety of your students. Asking the victim to “keep quiet”, slut shaming and victim blaming is NOT how you handle sexual assault. pic.twitter.com/k4skRodvXG

Previous article“Top Star” Prashanth Says “Shrooovv” In His Own Style For His Friend “Karan” !! Watch !!
Next articleSocial Media Erupts As Man Masturbated Infront Of 19 Y/O Student Inside Elevator !! “Its a Ploy” Says Police Officer !!

A man named as Balakrishnayya from Chittoor district in Andhra Pradesh killed himself after suspecting that he had Coronavirus. He did by believing that...

On Tuesday, The Directorate of Vigilance and Anti-corruption raided 60 premises linked to former minister and AIADMK leader SP Velumani and his associates in...