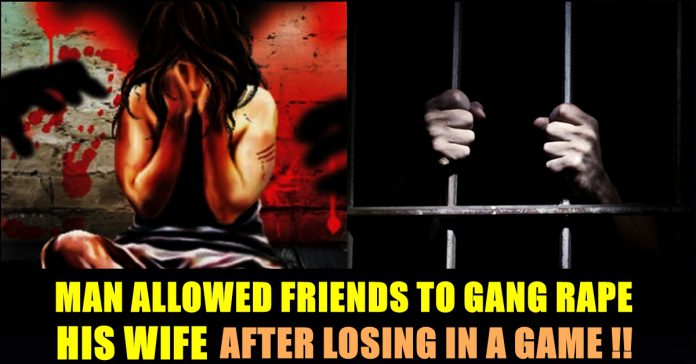 In a horrific incident, a 36 year old man who is addicted to alcohol and gambling, allegedly bet his wife and lost her to his friends. They reportedly raped the 30 year old woman and poured acid on her when she refused to continue sexual relations, an official report said. The accused was identified as Sonu Harirajan.

When the victim refused to have sexual relations with other men after two or three times, the husband threw acid on her. Sources alleged that he wanted purification of his wife. The shocking incident took place in Bhagalpur district of Bihar. Report suggests that the husband, resident of Hassanganj, allowed his friends to rape her on multiple occasions after betting her and losing the stake.

“As the case is extremely sensitive, we have immediately registered an FIR and arrested the accused. Further investigation is underway and other accused will be arrested too if they are found to be involved in this case” Rajesh Kumar Jha, Station house officer of Mozahidpur police station said.

The accused confessed that he lost the bet some one and half months ago. As per the commitment, the victim was to be handed over to the winners of the bet for a month but the victim refused to go with them after two three times.

“We are studying the statement of the victim and have arrested the accused. He has confessed that he ahs lot his wife in a gambling bet and also forced her to have sexual relations with his gambler friends” Rajesh said.

Report suggests that the victim sustained burn injuries after the husband tried to pour acid on her. Her in-laws held her captive in a house in Mozahidpur to hide the incident and gave her primary medical treatment.

She reportedly escaped from the house of her husband and reached the home of her parents which is located in another village. Luckily, she sought help from a social activist named Deepak Singh on Sunday. The Police were informed about it, following which a case was registered.

The husband and wife were married for over 10 years, but they have no kids due to excessive alcohol consumption of the husband, reports said. The victim informed that Police that her husband used to physically torture her for not being able to conceive. On 28th of October, he locked her up in a room with some of his gambling friends, after losing the stake in a game. The victim said that the friends of her husband raped her.

“We will submit the charge sheet soon against the accused after completing the investigation”, said Bhagalpur SSP, Ashish Bharthi.

Previous articleFans Trolled Sakshi For Talking About Finals !! Check Her Replies
Next articlePrithvi Shaw Is Trending In Internet After Getting Out For A Duck !!

Samantha Publicly Showed Middle Finger To Everyone Who Advised Her To Behave Married !!

Women have it hard in this country. Even when you rise to the top in a male-dominated industry with a huge gender pay parity...

An 8 year old tweet of a twitter user about the deadly virus COVID 19 which is killing millions of people across the globe...

After asking actress Krithi Sanon whether she accepts Alia Bhatt as the best actress in the world in a most recent episode, Director Karan...