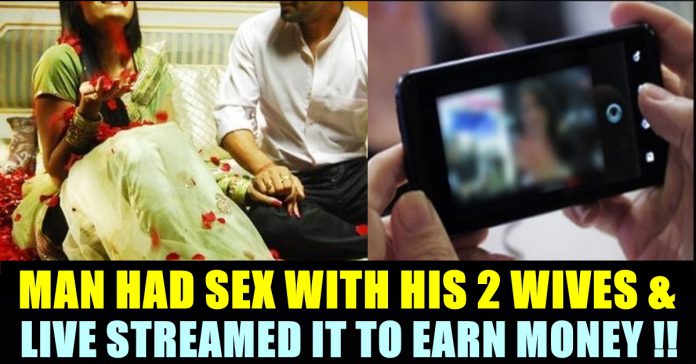 All of our plans to improve our financial status in 2020 tumbled in front of our eyes due to the Lockdown implemented by our government due to COVID 19 outbreak. Many people are looking for alternative ways to stay afloat in this Global pandemic. We are even witnessing people who are switching careers altogether to survive. Now, to our shock, a man from Madhya Pradesh’s Bhopal decided to live stream the videos of himself having sex with his two wives to earn money amidst the crisis. A case has been registered and the accused got arrested after one of his wives registered a Police complaint.

The 24 year old man used several platforms including dating applications and made the users of it to pay money to watch him having sex with his wives. People paid him and watched his “live shows” and the accused earned lakhs of money by doing this, reports suggests.

Soon after his second wife went to the Police, he got arrested. Police, on saturday, charged him with rape and violation of privacy after the complainant accused him of subjecting her to torture and criminal intimidation by exposing their intimate moments to public digitally.

Police officers reported that the accused have studied only till 10th standard but seems to have a good knowledge about technology and knows his way around technology. He has been using several dating apps and had learned to earn money from them, said Police.

The culprit used to send a message with a “menu” to people whoever liking his “display picture” on these apps. The menu suggests people to pay Rs.100 for a demo and going upto Rs.500, Rs.700 and Rs.1000 for different kind of requirements. “There were separate charges for “faceless” and “with face” streaming”, a Police officer said.

He reportedly earned Rs.6 lakhs and Police have detected the amount in just one of the bank accounts he opened on August 28. Police assumed that the accused was earning at least Rs.4000 per day. “Tracking down those who paid money proving to be a very tough task” officers added.

The first wife of the accused who belongs to Bengaluru met him on social media and got married to him. She is 7 months pregnant as of now. Second wife who is from Uttar Pradesh is a deeply spiritual person. The man made her believe that he is also a spiritual person and convinced her to marry him. They got married in a temple after a brief courtship. Both of them didn’t know about each other, an investigator said.

Police also said that the first wife didn’t have any complaint against him. “He had convinced her by showing her the dreams of a better future” CSP Vikas Pandey said. The accused had confessed to live streaming the sexual activities with his both wives. Cell phones, bank details and jewels worth Rs 12 lakh have been seized from him after Police registered cases under relevant sections against him.

When the trailer of Akshay Kumar's "Bachchan Pandey" got released on YouTube, many online fans of Tamil cinema wondered about the fact that Tamil...