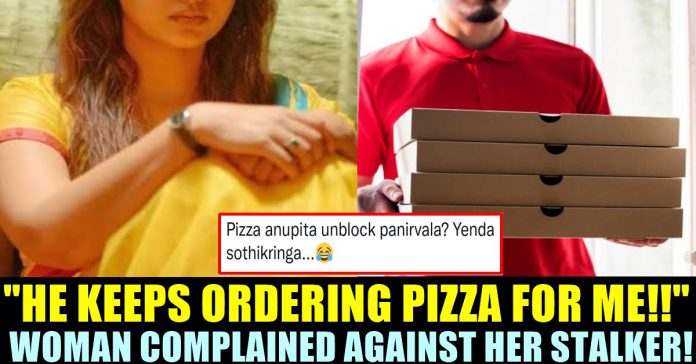 Getting pizzas delivered every day at the doorstep might sound amazing to many of them. This has happened for real in Bengaluru. A Chattishgarh man, residing in Bengaluru, has been sending pizzas to the woman who rejected his wedding proposal. The woman was not fascinated by this gesture. Rather she has complained about the man.

This news might sound trivial to most of them. On diving deep into this we come to know that the woman has been stalked by the guy for 4 years. This 36-year-old woman residing in Bengaluru has rejected the man for the same reason. She has complained to the Yelahanka New Town police.

The man has hacked the social media accounts of the woman. He has not only sent inappropriate photos and videos to her friends and families on her contact but has also posted them on her social media accounts. He has sorted the help of a detective agency in Koramangala to know about her whereabouts, as an outcome of which she was delivered with pizzas every day. He also warned the woman that he is having an eye on her, by sending two photos of his employees standing outside her home.

According to the complaint, a pizza was delivered to her on August 12. The woman was shocked to receive it in her name as she has not ordered the pizza. She has also stated that she has been stalked, maligned, insulted, and harassed by the man. To this, the woman has added that the man has disturbed her peace and privacy. She has claimed that pizzas have been delivered to her residence and office regularly. The woman in her complaint has admitted that she is living in constant fear of being attacked by the man or someone who is working for him.

The woman has mentioned that the man sent texts about her visit to her father’s place to her relatives. The man did not stop with this. Two men were sent by the accused to her father’s shop. The accused has records of her phone calls and access to the phone number of her friends and relatives.

This incident has slowly started spreading on social media and many people have been reacting to this incident on Twitter.

Pre paid or cash on delivery ?