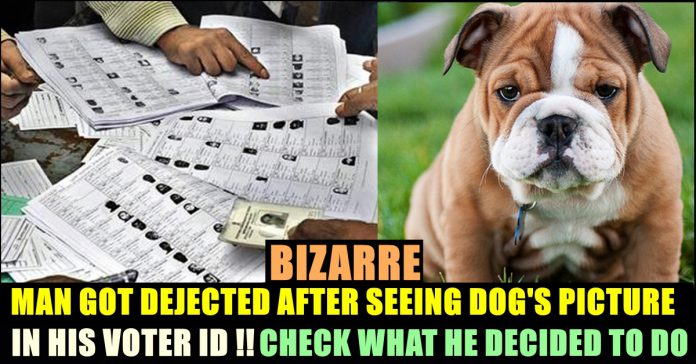 We have faced problems such as finding our names wrongly printed in our very own identity cards since our childhood days. Government continues to do the same blunder in our authentic identity proofs such as Voter ID, Aadhar card etc. Now, it went one step ahead and ruined a West Bengal resident’s voter ID by replacing his photograph with a dog’s one. The man who felt dejected after seeing a dog’s photo under his name, decided to file a defamation case against the Election Commission of India.

Named as Sunil Karnakar, the Indian citizen received his corrected voter ID card on Tuesday. To his shock, he found himself staring with four legs and with a tail. “There were some errors in my voter ID card so I had applied for a correction. When the corrected card came, the information was correct, but my photo had been replaced,” the frustrated 64-year-old voter of Bewa II’s Ramnagar village in Bengal’s Murshidabad said.

The victim who felt that the error was intentional felt extremely humiliated at many people who saw it made fun of it in public. “People who saw it, mocked me in public. I will drag Election commission of India to court” he said to the media.

A government official who is responsible for this blunder has said that he indeed spotted the mistake earlier and said that he has no clue how it remained uncorrected while reaching the voter. “We noticed the dog’s picture after the publication of the draft voters’ list. I rushed to Karmakar’s residence and brought back a picture of the man. But I am clueless as to how the card got printed with the dog’s photo anyway,” he said.

Sources reported that the error may occured due to the large scale panic among people that took place in Bengal over a possible citizen screening exercise. In recent times, Many people in West Bengal has rushed to apply a fresh voter id card and to rectify the errors in their existing ones. As a result of it, The district administration canceled leave for all government employees to have an error-free voter’s list.

One of a Block development officer said that Karnakar will receive a new voter ID card soon. He ensured that it is not his final voter ID. “If there is a mistake, it will be corrected” he said who went to add that the blunder of dog’s photo took place due to someone who filled online application to get voter id.

Previous articleChennai Man Requested This Actress To Buy Him iPhones To Play PUB-G !!
Next articleKushboo Gives Back To A Hater In His Own Way !!

Video Jockey Deepika, who was playing the role of Aishwarya in the famous Vijay TV soap Pandiyan Stores was replaced by another serial actress....