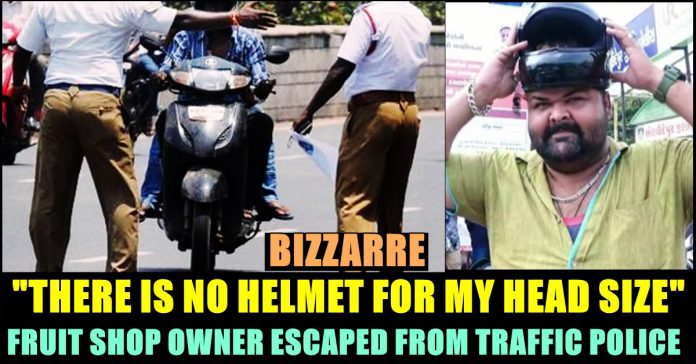 The new traffic rules and penalty amount for violating it are making headlines everyday. Recently, a report said that Lorry, Truck drivers belong to Uttar Pradesh have to pay fine if they caught wearing “Lungi” while driving.

Now, rarely a Gujarat citizen was let go by police officer even had he not wore a helmet while driving his two wheeler. The traffic cops stopped Zakir Mamon, a fruit shop owner in Bodeli town in Chhota Udaipur district, for not wearing a helmet. However, when Zakir told his problem to the cops which surprised them.

Zakir’s head is too big to fit in a helmet. He has not been able to find a helmet in the market that can fit on his head. “I respect the law and I want to follow it by wearing a helmet but I have visited all the shops which sell helmets but could not find any helmet which can fit onto my head. I keep all relevant documents with me but as far as helmet is concerned, I am helpless. I have told the police about my unique problem,” Zakir said.

Zakir’s family worries that because of the head-size problem, he would have to pay hefty fines every time he steps out of the house on his motorcycle.

However, the police understood his problem and did not penalise him. “It is a unique problem and we have not fined him as we understand his issue. He is a law-abiding person and keeps all relevant documents while driving,” Vasant Rathva, Assistant-Sub-Inspector, Traffic Branch, Bodeli town, said according to the Times now report.

Previous articleJUST IN : Prashanth Revealed The True Face Of BLUE SATTA Maaran !! SHOCKING !!
Next articleRemember This Girl From “Varma” Teaser ?? She Opens For The First Time About Banitha Sandhu!!