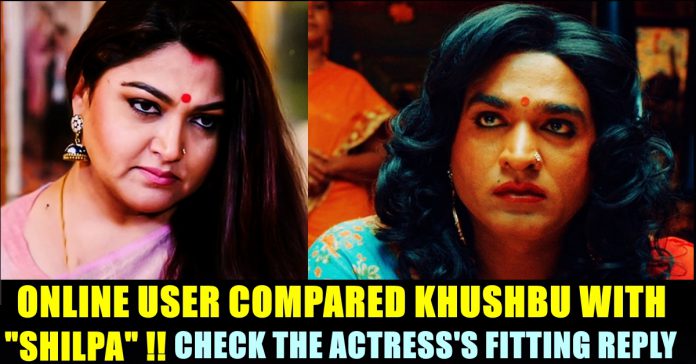 With just 10 days to go for the assembly election, political parties and candidates are looking for all the ways to gain votes from the public. Digital promotions from all the prominent parties are taking place in the state in full swing. Apart from meeting the people to hunt votes, candidates are also sharing the pictures of the events in social media platforms to grab the votes of the social media users among which most of them are youngsters.

BJP’s Khushbu is also sharing the videos and pictures of herself campaigning for her party in her official Instagram handle where she enjoys 8 lakh plus followers.

Most recently, she uploaded a selfie of herself with a caption saying “After a very long tiring day, I continue to smile because love showered by the people takes away my fatigue. #Vote4Kushboo #kushboo4thousandlights #Vote4BJP #Vote4Lotus”

Among the many people who wished her the luck for her success in the upcoming election, an Instagram user named Sarfaraz came up with an offensive comment to hurt the actress. He compared the looks of the actress with “Super Deluxe” Shilpa which is a fictional transgender role played by Vijay Sethupathi in one of his recent films.

Replying to him, Khushbu said that she feels great to be compared by “Shilpa” which won national award for Vijay Sethupathi. She also advised the user to stop making fun of transgenders who are equal to us. “great. It won a national recognition for @actorvijaysethupathi . And I read your mind. Pls stop making fun of transgenders. They are equal to us. 🙏🙏😊” her reply read.

Another follower made a derogatory comment on the looks of the actress. Check how she replied to him :

Kushboo Sundar is an Indian film actress, producer and television presenter who has acted in more than 200 movies. She is predominantly known for her work in the South Indian film industry. Khushbu joined the Indian National Congress on 26 November 2014 after meeting with then Congress President Mrs. Sonia Gandhi, and then Vice-President Mr. Rahul Gandhi. She was serving as the National Spokesperson of the INC and joined BJP party lately. She is known for giving befitting replies to miscreants in social media platforms.