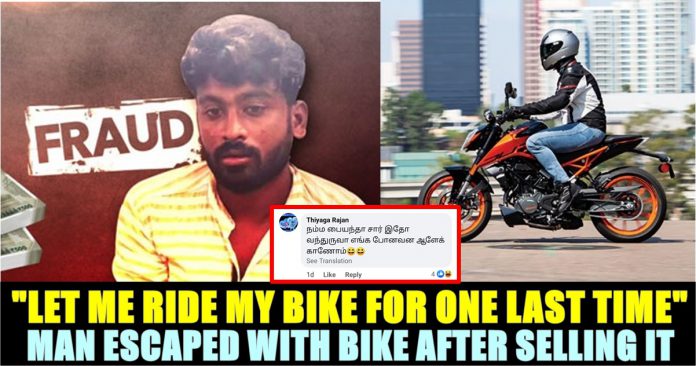 A man was cheated for intending to buy a second-handed bike on OLX. The news is going viral among the users of social media platforms.

Vikram is from Kumbakonam in Thanjavur district intended to buy a second-handed bike on OLX. As we all know, OLX is an online platform to buy and sell used goods. The name OLX stands for OnLine eXchange. Vikram surfed the OLX to buy a KTM bike which is a sports bike price of which starts at Rs.1.70 lakh in India.

Lakshmana Kumar uploaded his KTM bike for sale on OLX. Lakshmana made a deal to sell it for Rs.64,000. Vikram who happened to see it had said that he has to examine the bike before he pays the money.

On cloud nine, Vikram went enthusiastically to buy his desired KTM bike, never knowing that Lakshmana is going to fool him. They both met near Lakshmi Mills and Vikram handed over the cash of Rs.30,000 to Lakshmana Kumar.

After receiving the cash, Lakshman started his drama by expressing his emotional attachment to the vehicle. He reportedly said to the buyer that he wants to ride the bike one last time. Falling prey to his trap, Vikram agreed to it and didn’t get to see Lakshmanan ever since. Vikram realized that Lakshmana Kumar has cheated him only after half an hour.

With the grief of losing his money of Rs.30,000, Vikram returned to his place at Kumbakonam without even filing a complaint against Lakshmana Kumar. Few days after this incident, Vikram, while using the OLX app, found the same KTM bike uploaded for sales by the same person on the 31st of last month.

This time Vikram contacted Lakshmana Kumar through his friend’s mobile. Vikram did the same as the last time. He asked Lakshmana to come along with the bike to examine at the Lakshmi Mills in Coimbatore. Lakshaman who was planning to cheat one more person with the same bike reached the location with his bike.

Vikram on beforehand informed about this to the C2 police station at Gopalapuram in Coimbatore. Lakshmana Kumar was caught redhandedly. Now he is in police custody. The police officials are still inquiring about the bike with which he cheated Vikram.

The video of the news report is going viral among the users of the internet. Check out the screenshot of some of the reactions that surfaced :

Samantha Akkineni, who has carved a niche for herself in the Tamil and Telugu film industries over the years, was at the receiving end...

Priyanka Chopra Dating Nick Jonas Who Is 10 Years Younger Than Her !! : Check Out How The Fans Thrashing The Duo !!

Priyanka Chopra and Nick Jonas' rumoured romance has been making headlines for a while now. After attending the wedding of Nick's cousin in New...

Recently, an advertisement which was released by Pakistan’s Jazz TV, created a lot of hype on social media. Mocking Wing Commander Abhinandan, the ad shows...