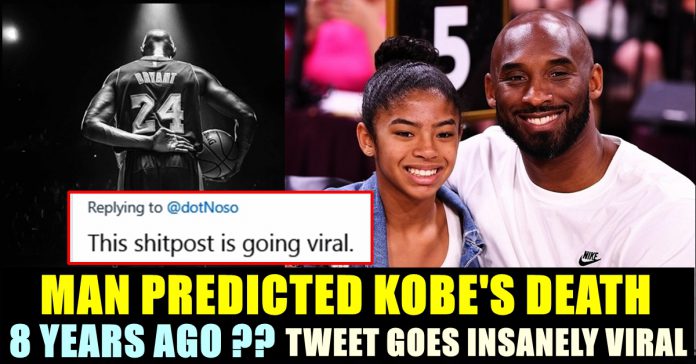 The entire world is mourning on the demise of the legendary basketball player Kobe Bryant. Kobe Bryant, the basketball icon who won five NBA championships with the Los Angeles Lakers, died in a helicopter crash Sunday, leaving a legacy that spanned 20 years in professional sports and a growing second career as an investor.

Bryant was among nine people killed when a helicopter slammed into a hillside in Calabasas, California, the Los Angeles County Sheriff’s Department said. He was 41. Also among the victims were his 13-year-old daughter, Gianna, another parent and a teammate from Gianna’s travel sports team.

As the death of the immense talent shocked the Internet, a tweet which was posted 8 years ago also did the same to the users of Internet. The user named as Noso, posted a tweet on 14 of November in the year 2012 regarding the death of Kobe Bryant. His tweet said “Kobe is going to end up dying in a helicopter crash” which became true today.

Kobe is going to end up dying in a helicopter crash

Since the death of the NBA star, the tweet is going insanely viral as it received nearly 3 lakh likes. However Noso has apologized for the tweet while replying to his fellow twitter user but didn’t remove it yet despite of several requests from the fans of Kobe.

Though we all know that the Noso posted this tweet to laud the skills of Kobe in the basket ball court, many users came up with replies asking him to say their wishes. As soon as the tweet went viral, users of the micro blogging social media site, came up with requests. They have been asking Noso to predict some other things like Donald Trump’s death, Kejriwal’s election result etc.

Check out some of their reactions for this tweet below :

can u tell me when i’ll finally be happy again

Videos of the legendary sports personality is doing rounds across the internet. Along with Tamil celebrities Anirudh Ravinchander, Ashwin Ravinchandran, Siddharth many fans are expressing their condolences for Kobe Bryant. Lionel Messi, Cristiano Ronaldo also took their official social media accounts to react on this sudden demise of the talent.

Devastated and shocked. An integral part of our childhood. Rest in peace Kobe pic.twitter.com/6EDbdcd674

Kobe Bryant died???😢 One of greatest sportsmen of our time is no more. #RIPKobe

Let us pray for the soul of Kobe and the nine other members soul to rest in peace !!

Previous articleThis Famous Cricketer Was Supposed To Act In Panchathanthiram !! WATCH
Next articleYoung Director In Big Trouble For His Old Tweets Against Actor Ajith !!

Dhanalakshmi Pushed Sherin?? Kurumpadam Is Out

Debate on whether Dhanalakshmi pushed Sherin away or not is going on in the online platforms. While a set of viewers claim that Sherin...