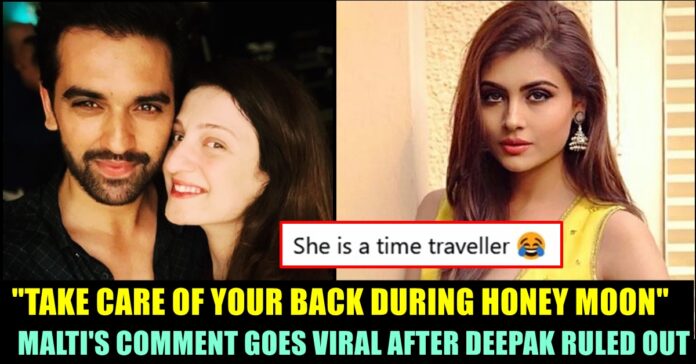 Followed by star Indian player Jaspirit Bumrah, Deepak Chahar of Chennai Super Kings fame reportedly ruled out of the upcoming T20 world Cup tournament due to injury. He who was expected to be one of the replacements of Bumrah, failed to make it to the main ICC event. Now, a reply made by his sister Malti Chahar in one of his honeymoon posts in Instagram is going viral in social media platforms.

NEWS ALERT: Deepak Chahar has been ruled out of #T20WorldCup2022 due to an injury. Shardul Thakur replaces him in the reserves.

Chahar was named in the T20 world cup squad in the reserved list. Chahar didn’t play single ODI match in the just concluded South Africa series due to back stiffness which he suffered during the same opposition in the final ODI match.

Besides Shami, Chahar was likely to replace Bumrah and his injury has now deepened India’s bowling worries. While cricket fans reacting in various ways due to the back to back injury announcements from the table of Yeam India, a comment made by Chahar’s sister Malti is trending in the online platforms.

Deepak Chahar who represented Dhoni led Chennai Super Kings and Indian cricket team, has go married recently. Malti Chahar, an aspiring actress who is expected to make her debut in Tamil film industry soon, who is also a sister of the pace bowler, came up with a post in her official Twitter handle, to wish the best for the couple.

On 1st of June 2022, Deepak Chahar got married to his longtime girlfriend Jaya Bharadwaj and the event saw the presence of the couple’s close friends and family members. Suresh Raina, Robin Uthappa and few others from his Chennai Super kings team took part in the special event. The grand ceremony took place at Agra.

Among the many who wished the youngster on the special occasion of his life, Malti Chahar, the, cricketer’s sister came up with a post in her Instagram handle to wish him.

After wishing the couple, a very happy married life, Malti asked Chahar to be cautious about his back during his honeymoon as there are chances for him to represent Indian cricket team in the T20 world cup tournament. “Ab ladki hui humari…Wish you guys a very happy married life @deepak_chahar9 please take care of your back during your honeymoon.. we have World Cup ahead #family #brother #marriage #siblings” Malti’s caption for the post read.

Here’s her post which was uploaded on 3rd of June :

Now, after Chahar got ruled out from the tournament, the comment of Malti is trending in the social media platforms. Check out some of the reactions below :

She knew the future 💀

Bumrah also back injury ofter marry .. why bowlers back is injury after marry 🥺

She is a time traveller 😂

You mean Honeymoon will continue !?!🤭🤭

She was visionary but Deepak Chahar took her for granted lol https://t.co/HaO0aC0qyB

Fans of team Bangladesh has been trending "Cheating" hashtag in the micro blogging social media site with reactions claiming 5 runs for an alleged...

Celebrities Of Vijay TV Got Emotional Over The Demise Of Their Director Thaai Selvam !!

From Pavithra Janani of "Eeramana Rojave" fame to Priya Bhavani Shankar of Kollywood film industry, almost all the stars who belong to Vijay TV...

First Ever Reaction Of Arjun das After Seeing Aishu’s Post!!

Arjun Das reacted for the first time to the post uploaded by Aishwarya Lekshmi in her Instagram handle. Calling her by her "Ponniyin Selvan"...