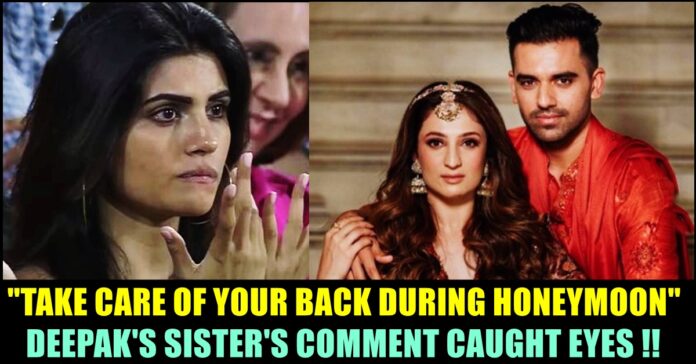 Deepak Chahar who represented Dhoni led Chennai Super Kings and Indian cricket team, has go married recently. Malti Chahar, an aspiring actress who is expected to make her debut in Tamil film industry soon, who is also a sister of the pace bowler, came up with a post in her official Twitter handle, to wish the best. The words she chose caught the eyes of her followers and Deepak Chahar’s as a result of which memes are being made in the social media platforms.

On 1st of June 2022, Deepak Chahar got married to his longtime girlfriend Jaya Bharadwaj and the event saw the presence of the couple’s close friends and family members. Suresh Raina, Robin Uthappa and few others from his Chennai Super kings team took part in the special event. The grand ceremony took place at Agra.

“When I met you first time I felt that you are the one s and I was right. We have enjoyed every moment of our life together and I promise you to keep you always happy like this .0ne of the best moment of my life . Everyone pls give your blessings to us” read the post Deepak Chahar.

Among the many who wished the youngster on the special occasion of his life, Malti Chahar, the, cricketer’s sister came up with a post in her Instagram handle to wish him.

After wishing the couple, a very happy married life, Malti asked Chahar to be cautious about his back during his honeymoon as there are chances for him to represent Indian cricket team in the T20 world cup tournament. “Ab ladki hui humari…Wish you guys a very
happy married life @deepak_chahar9 please take care of your back during your honeymoon.. we have World Cup ahead #family #brother #marriage #siblings” Malti’s caption for the post read.

The Post’s caption garnered wife attention among the online users with many pointing it out in the comment section of the upcoming actress’s post. Unfortunately, Chahar couldn’t participate in the recently held IPL tournament due to a back injury that caused while he was recovering at the National Cricket Academy, Bengaluru. However, the cricketer is expected to make his come back in the Indian team soon as he is an integral part of the T20 set up.

Malti Chahar who rose to fame after cameramen of IPL captured her expressions during a CSK match in which she was cheering for her brother, is all set to make her Kollywood debut through a film named “Walking Talking Strawberry Ice cream” produced by Vignesh Shivan and Nayanthara under their Rowdy pictures banner.