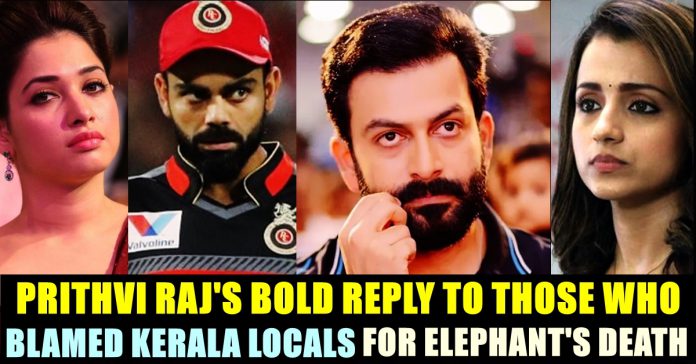 In a way of shutting down all the emotional posts from cinema celebrities, sports personalities and public people, Malayalam actor Prithvi Raj who is known among Tamil audience for acting in films like “Saththam Podathe”, “Ninaithaley Inikkum” came up with a reply saying that the incident doesn’t have a communal connection.

Almost every influential people of country India including Indian cricket team captain Virat Kohli uploaded a social media post believing that a group of people caused the death of the pregnant elephant which died due to a cracker filled pineapple exploded in its mouth. After getting severely injured, the elephant died after roaming in the village for few days. When actor Nakkhul cursed those who caused the incident as “Bastards”, actress Amala Paul wanted to burst the fire crackers in their asses. Similarly many people with highest number of followers made emotional statements against Kerala locals believing that they caused the damage intentionally. Several art depictions regarding the same surfaced in Internet with emotional captions.

Sometimes I wonder if we should really wait for karma to take action. The only deserving punishment for this evil act is to burst the same crackers in their ass.

Appalled to hear about what happened in Kerala. Let's treat our animals with love and bring an end to these cowardly acts. pic.twitter.com/3oIVZASpag

We are savages. Are we not learning ? To hear what happened to the elephant in Kerala was heartbreaking. No animal deserves to be treated with cruelty.

I am appalled and heartbroken with what happened to the elephant in Kerela. I hope we come up with a strict laws for animal protection. pic.twitter.com/ahchQLv23H

Like I said people are monsters not these poor animals.. goes to prove that literacy has nothing to do with being humane or empathetic or even have the slightest sense of having common sense..!! Disgusted.. I hope corona gets these monsters and they die.!! pic.twitter.com/iZgnd0UqcO

Maybe animals are less wild and humans less human. What happened with that #elephant is heartbreaking, inhumane and unacceptable! Strict action should be taken against the culprits. #AllLivesMatter pic.twitter.com/sOmUsL3Ayc

Couldn’t come out of this
She was pregnant https://t.co/Kiw5CAsV6z pic.twitter.com/kQl0KnAzVb

Now, Actor Prithviraj who belongs to Kerala, uploaded a post confirming that the Fire crackers stuffed Pineapple was not intentionally fed by someone. He said that the elephant accidentally ate the explosive snare that was kept to ward off wild boars to protect the crops. He pointed out that the act is illegal but is widely being practiced. “There is absolutely no communal connection to the incident. Both forest and police officers registered case andthe investigations are on.” his post read which also notified that the death happened on 27th of May, not yesterday.

KK Sunil Kumar, while talking to media , has said that they (authorities) are assuming that the elephant fell prey to the explosive snare used to fend off wild boars. This statement from the officer makes us realize that no person is directly involved in this act. It is widely believed that a group of people fed the cracker filled pineapple to the 15 year old elephant to have fun. However, using snares to trap, wound or kill animal is a cruel practice, and it is punishable under the Wildlife Protection Act if people even try to do it. (Also Read : What Is The Actual Truth Behind The Demise Of The Kerala Elephant ??)

The officer further stated that there is no evidence surfaced to conclude that the elephant was intentionally fed such an explosive. “In fact, we are also investigating if it bit a fruit laden with explosives or directly bit these snares” he added.

A tweet uploaded by Lakshmy Ramakrishnan on 30th of October is believed by her followers to be posted against Vanitha Vijayakumar with whom she...