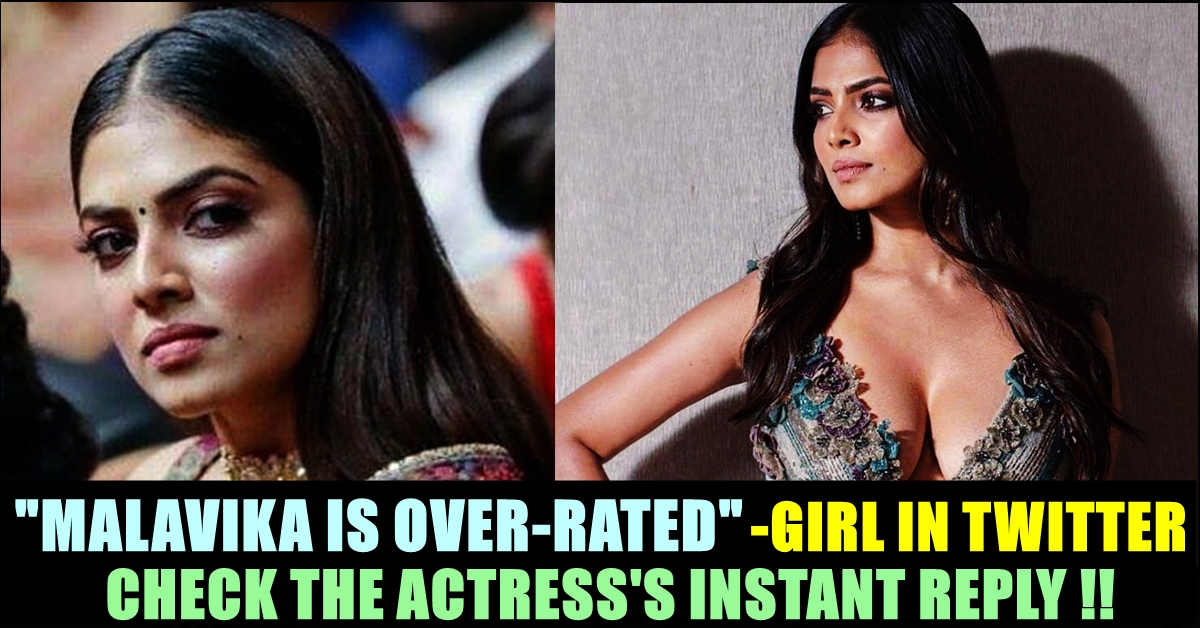 Apart from grabbing the headlines for acting in Vijay’s highly expected “Master”, Malavika Mohanan is getting the limelight for her sassy replies in twitter. Months ago she made it after questioning an illustration made by a fan which showed her merely as a cook while other crew members of “Master” did their respective jobs. Now, to a twitter user who proposed a debate on “Malavika is overrated”, the actress came up with a savage reply within minutes.

Malavika Mohanan is the recent sensation among the fans of Tamil cinema. Best known for her photos in Instagram, Malavika is expected to have a bright future in Kollywood as she already featured in the films of two top stars of Tamil cinema. Having 15 lakh followers in Instagram, she never failed to engage her followers by uploading her pictures from various photoshoots.

Despite of acting in very few released films, the fame she gained among Internet users is humongous which made a user of the micro blogging social media site to write “If there’s ever going to be another fight, may I propose the topic ‘Malavika Mohanan is overrated’?” in her tweet.

Exactly after the 16th minute of the tweet posted, Malavika Mohanan who is pretty much active in social media platforms, replied to the tweet, without even getting tagged. “I know, right? Even I don’t get the hype honestly” the actress wrote as her reply.

I know, right? Even I don’t get the hype honestly

When the original tweet got just 300 plus likes so far, tweet of the actress received 1600 likes from the users of the site. Another user said that the actress gained the hype without even doing any notable movies to which the actress wrote “Imagine once I do more notable movies how awesome it’ll be!”

Imagine once I do more notable movies how awesome it’ll be! 😜😍

A fan received a virtual kiss from the actress after expressing his lobe towards her.

Here’s how she answered to another fan :

These cool replies on a Sunday noon won her followers in Twitter and they wondered how Malavika replied to the tweet without getting mentioned and wondered. Well, we have to assume that the actress should have randomly searched for the latest tweets which contains her name in Twitter to kill her complete lockdown blues on Sunday.

“The task of a woman even in a hypothetical “movie house” is to cook ? When will gender roles die ? Sigh”. Malavika came up with a disagreement with the concept of an illustration during late April. The actress, in her first tweet, she directly said that the design is “So sexist”. She asked why the only female in the house is doing domestic work while everyone else seems to be chilling/working.

However both the tweets are deleted by the actress for unknown reasons, only the screenshots are doing rounds in the micro blogging social media site. Many including singer and Metoo activist Chinmayi felt that Malavika Mohanan should not have deleted her tweet. However, a fan came up with an alternative poster and the actress felt so happy seeing that.

A.R Rahman’s Emotional Tweet On Being A Victim Of Bollywood’s Gangism !!
Vishal Tested Positive For COVID 19 & Got Cured Within 7 Days !! Check How !!