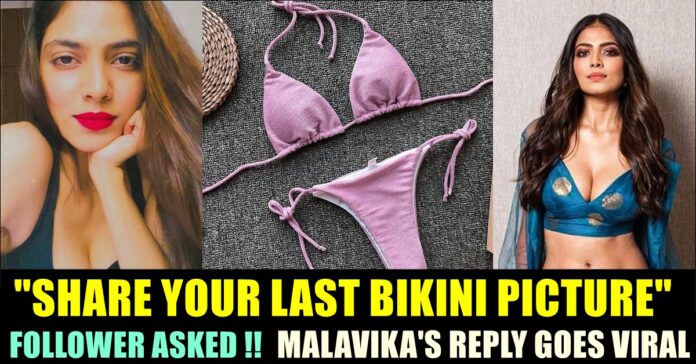 Malavika’s Reply To A Follower Who Asked Her Bikini Picture Is Trending !!

Malavika Mohanan of “Master” fame, on Friday, replied to a twitter handle through which an user asked the actress to upload her last bikini picture. The actress uploaded the pictures of her bikini clothes to troll the online user and her reply is doing numbers in the micro blogging social media site. The actress who is pretty much active nowadays, has been shutting down toxic twitter, Instagram users in style.

Debuting through Rajinikanth’s “Petta” as Sasi kumar’s pair, Malavika Mohanan started her Kollywood career as a heroine through “Master” of Vijay and became one of the most talked about actress of the year 2021. Malavika appeared in the film as a college professor named “Charu latha”. Most lately, she appeared along with Dhanush in a film named “Maaran” directed by Karthick Naren.The actress is enjoying a huge fan base in social media platforms as she has got 3 million followers and 9 lakh followers in Instagram and Twitter respectively. On the work front, Malavika is expected to be seen in a Hindi film titled “Yudhra”.

Actress Malavika Mohanan who is busy signing movies with some of the leading actors of South Indian film industries, never missed to engage her followers through her online activities such as conducting chat session, uploading pictures/reels from her photoshoots etc. The actress enjoys a separate fan base for the pictures and reel videos she is uploading in her twitter and Instagram handles.

On Friday, the actress conducted a chat session with her twitter followers. Among the many who questioned the actress about her favourites, upcoming projects etc, a twitter user named Mehrrraj, asked the actress to share her last bikini picture by uploading a picture of her. “Ur last bikini pic @MalavikaM_ #AskMalavika #MalavikaMohanan Plz share with ur fans”

The tweet garnered the attention of Malavika Mohanan who decided to reply once and for all for such toxic followers. Without uttering a word, Malavika uploaded a picture of her bikini clothes.

Unlike her other replies, this reply of the actress garnered 1000 plus likes in no time with 200 plus quoted replies from the fans.

Check out some of the other replies of the actress below :

I love eating biriyani, sweets, tiramisu, basically everything that’s unhealthy 🤤 🤤 🙊🙊🙊 so I realllyyyy have to force myself to eat healthy and also workout at least 4 days a week! https://t.co/jYdnTMdGzL

Online fans are always desperate in interacting with their favourite celebrities. Samantha Ruth Prabhu is one of the many actresses who is very...