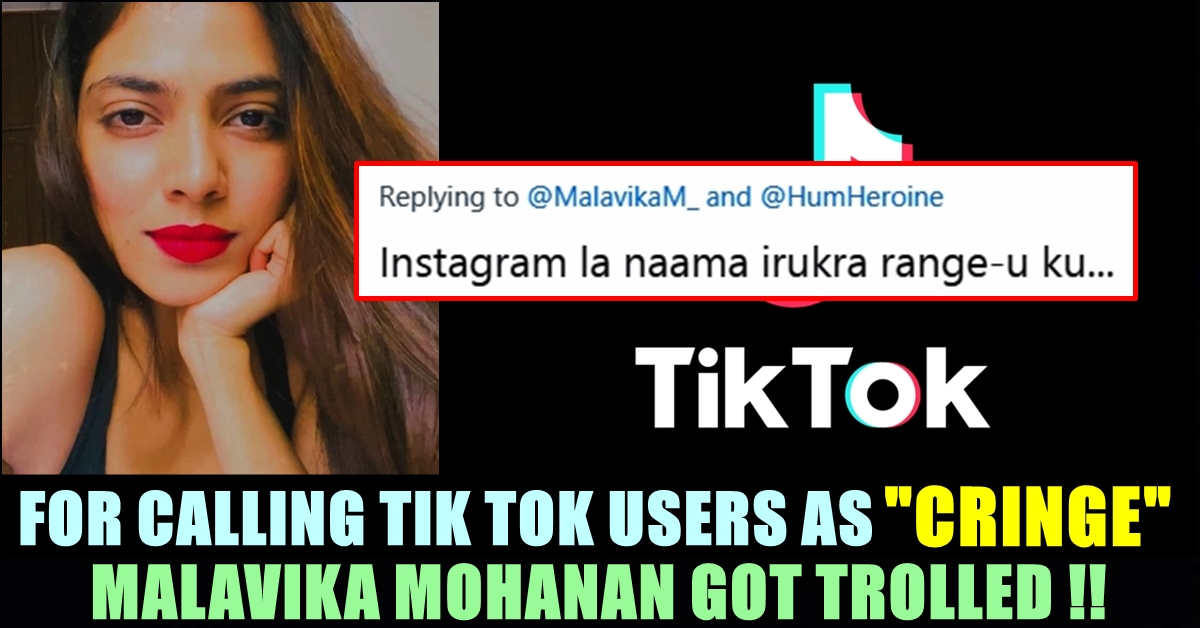 “Master” actress who rose to fame among Tamil audience through her Instagram pictures, took a dig at the users of Tik Tok mobile application after the app got banned by the Indian government. While replying to one of a twitter user named as Srishti jayin whom Malavika follows, the actress destroyed the life of Tik Tokers in seconds.

Being acted in the mega budget blockbuster film “Petta” as Sasi Kumar’s love interest, Malavika grabbed a special place among Tamilnadu youngsters only after committed to do the female lead in Vijay’s upcoming film “Master”. The actress who is pretty much active in social media platforms, answered to a tweet which asked “Where are all the tiktokers going to go now ?”

The actress who seems to have literally hated them all these days, said that they would go to a lesser “Cringe” application. “Cringe” is an internet word used to mention a content which contains amatuer acting or public statement. Sometimes, the users of social media also use the word to mention an individual who portrays himself/herself as an abnormally “good” personality.

“Hopefully to a lesser cringe app” wrote Malavika as a reply to that tweet. Check out her tweet here :

Hopefully to a lesser cringe app

This tweet grabbed a wide attention and received several kind of reactions from her followers. Few accepted to what Malavika said and the others trolled the actress for degrading a community which belongs to Tik Tok. Check out some of their reactions below :

I mean not everyone can get chance in acting using their cleavage right?

Director Made Fun Of Rajinikanth’s Tweet On Sathankulam Issue !!
Gowri Kishan’s Befitting Reply To An Aunty Who Criticized Her Skin !!