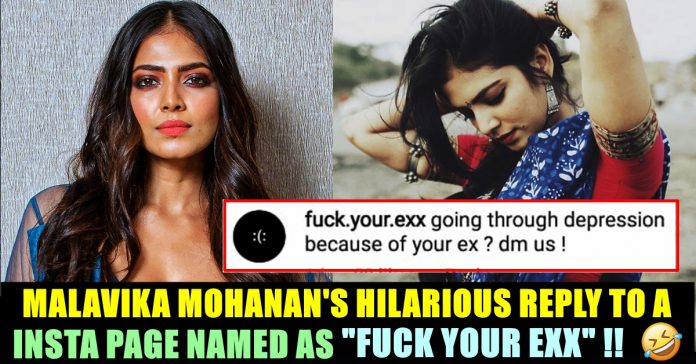 Malavika Mohanan, one of the most active Tamil heroines in social media platforms, is interacting with her followers who are commenting on her post every now and then. Apart from the attention she is receiving for her elegant pictures in Instagram, her witty replies to trolls and responsible replies to requests of fans has a separate fan base. In one of her recent posts, the actress tickled the laughing bones of her followers with her reply to a random Instagram page named as “Fuck your ex” which commented on her post to gain followers.

Malavika Mohanan enjoys 16 lakh followers for her Instagram account and we have seen Instagram pages commenting in the posts of such celebrities to gain their followers. The “Petta” actress recently uploaded a picture of herself operating a laptop with cat filter on. She wrote “at work #meowyoudoing?” as her caption.

The post received nearly 2 lakh likes and enormous number of her followers commented on it as well. Meanwhile, an Instagram page named as “Fuck your ex”, has been constantly making an irrelevant comment promoting their page in Malavika’s recent posts. “going through depression because of your ex ? dm us” ! their comment on Malavika’s post reads.

Mostly celebrities who are working in film industry would avoid such comments even if they happen to witness them. Unlike them , Malavika, replied to the page and said that she is so curious to know why they are passionate about wanting to know about the ex girlfriends/boyfriends of others. “I am so curious to know why you’re so passionate about this” she replied which made her followers to go ROFL.

Apart from grabbing the headlines for acting in Vijay’s highly expected “Master”, Malavika Mohanan is getting the limelight for her sassy replies in twitter as well. Months ago she made it after questioning an illustration made by a fan which showed her merely as a cook while other crew members of “Master” did their respective jobs. Recently, to a twitter user who proposed a debate on “Malavika is overrated”, the actress came up with a savage reply within minutes.

Despite of acting in very few released films, the fame she gained among Internet users is humongous which made a user of the micro blogging social media site to write “If there’s ever going to be another fight, may I propose the topic ‘Malavika Mohanan is overrated’?” in her tweet.

I know, right? Even I don’t get the hype honestly

Imagine once I do more notable movies how awesome it’ll be! 😜😍

The actress came up with a disagreement with the concept of an illustration during late April. The actress, in her first tweet, directly said that the design is “So sexist”. She asked why the only female in the house is doing domestic work while everyone else seems to be chilling/working.

Comment your views on these replies of the actress !!

Previous articleJUST IN : Fans Went Gaga Over Vijay’s “Go Green” Pictures !!
Next article“Planting Tree In Your Own Villa Is Not Social Concern” – Vivekh Replied To The Criticism Faced By Vijay !!