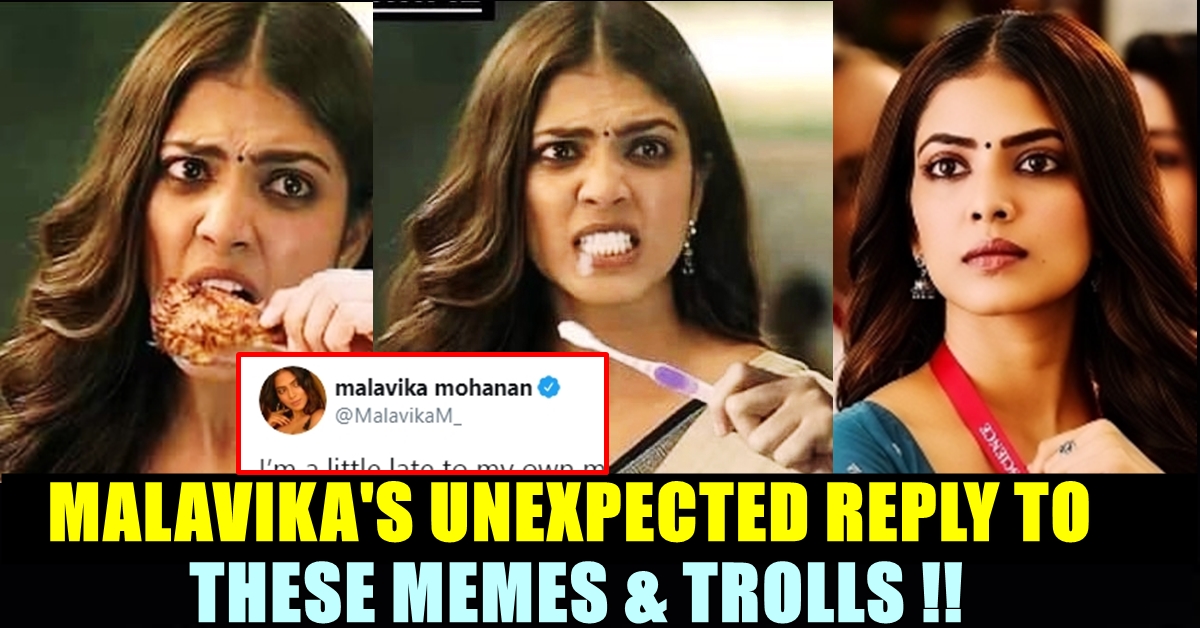 Model and actress Malavika Mohanan responded to the memes and trolls that got surfaced on Internet since the release of her second Tamil film “Master”. On seeing netizens morphing the screen shots of her emotional scenes that took place in the film and making hilarious memes out of it, Malavika Mohanan, while sharing a series of her favourites from it, said that life is too boring if you can’t laugh t yourself.

Being acted in the mega budget blockbuster film “Petta” as Sasi Kumar’s love interest, Malavika grabbed a special place among Tamilnadu youngsters only after committed to do the female lead in Vijay’s “Master”. The actress appeared in the film as a college professor named “Charu latha”. She who gets inspired by JD, played by Vijay, sends him to a Juvenile school without his knowledge where the rift between the rift between the protagonist and antagonist.

Many trolls and memes based on the characterization of “Malavika” kept surfacing in the internet since the film got released in Amazon Prime. Netizens trolled the character of “Charaulatha” for sending an alcoholic professor to take care of juvenile students without his knowledge and blaming him for the demise of two students.

Trolling the scene where Charulatha emotionally revealed the cause of death of the tow students, netizens who watched the film started making hilarious kind of memes by morphing Malavika’s face with tooth brush, chicken leg piece. Few also criticized the acting skills of the actress.

Chandramukhi snake had a better role than her

Now, responding to these memes and trolls, Malavika herself came up with a tweet expressing her admiration towards them. The actress said that he laughed so hard on the toothpaste one and said that Life is too boring if one can’t laugh at himself/herself.

“I’m a little late to my own meme-fest, but this is hilarious guys. Sharing some of my personal favourites which cracked me up(I died laughing seeing the toothpaste one) Life is too boring if you can’t laugh at yourself, right?” read the tweet of the actress who shared the pictures of her own memes.

I’m a little late to my own meme-fest, but this is hilarious guys😂 Sharing some of my personal favourites which cracked me up(I died laughing seeing the toothpaste one)😂 Life is too boring if you can’t laugh at yourself, right? 😜 pic.twitter.com/UAABIUdBZ0

This tweet from Malavika won the hearts of her followers as she didn’t lose her nerves unlike other heroines. Check out some of the reactions she received below :

Unexpected!! Good you are accepting the trolls and taking it lightly.. This kinda attitude being a star makes you go higher..

“Master” was supposed to release during April month of 2020 and got postponed due to COVID 19 outbreak. Now, after the makers decided to release the film on 13th of January ahead of the Pongal festival, the film got released in theatres with highest expectations.

Comment your views on this reply of the actress !!