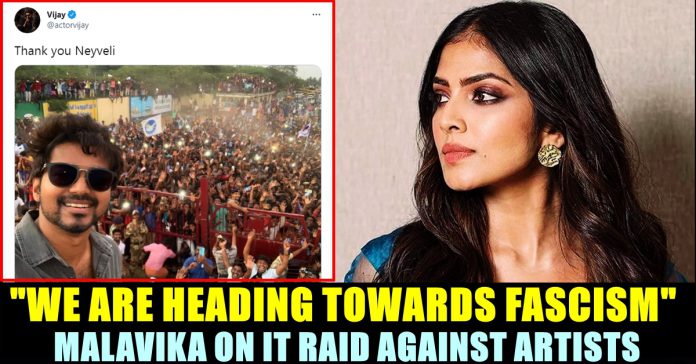 Malavika Mohanan Raised Voice Against The IT Raid On Taapsee & Anurag !!

Officials of Income Tax department raised the properties linked to filmmaker Anurag kashyap and actress Taapsee Pannu in Mumbai over alleged Tax evasion, according to sources. Both were questioned by income tax officials in Pune. It is notable that the duo is known for raising voice against the BJP government through their respective social media platforms.

It was reported that searches took place at 30 locations in Mumbai and Pune, including premises linked to a talent agency as well as Phantom films, which was co-promoted by Anurag Kashyap, producers Vikas Bahl and Madhu Mantena.

“The Income Tax department probes someone based on whatever information they get. The issue goes to court later,” Information and Broadcasting Minister Prakash Javadekar said during a BJP briefing. Exceed Entertainment and its promoters are also being searched. Exceed has been managing Saif Ali Khan for several years. Some executives of Kwan Talent Management, which manages actor Deepika Padukone, are being questioned.

Both Anurag Kashyap and Taapsee have criticized the current government in several occasions. They recently raised voice supporting the farmers regarding the protest they conducted. Taapsee, responding to a tweet uploaded by universal Pop star Rihanna, uploaded a tweet saying that “one” tweet rattling one’s belief.

“If one tweet rattles your unity, one joke rattles your faith or one show rattles your religious belief then it’s you who has to work on strengthening your value system not become ‘propaganda teacher’ for others.” Taapsee’s tweet which was uploaded on 4th February said.

If one tweet rattles your unity, one joke rattles your faith or one show rattles your religious belief then it’s you who has to work on strengthening your value system not become ‘propaganda teacher’ for others.

Many people started criticizing the government for conducting an IT raid against the two efficient artists. Memes, reactions trolling the government are also surfacing in the Internet. Actress Malavika Mohanan who is known for appearing in the recently released blockbuster film “Master” came up with an Instagram story slamming the decision of conducting an IT raid against the duo.

“We are heading towards fascism, one raid at a time” the “Master” actress wrote in her story to make her stand public on the issue.

It is notable that actor Vijay, after criticizing the government in the audio launch of one of his films, became a subject to IT raid during the shoot of “Master”. After the raid, Sources in the department stated that Vijay had paid the necessary taxes for the salaries that he had received for both Bigil and Master.

The actor took a selfie after facing the IT officials and it became the most retweeted post of year 2020.

Check out some of the reactions for the IT raid on Anurag and Taapsee :

Anurag Kashyap, a director par excellence, an avid dog lover, a climate warrior, a charsi, an eminent activist, who always wanted the world to be a better place, who has just been subjected to mental trauma by fascist Modi's IT raid is 48 years old! Just 48!

Let's that sink in!

IT raid at @taapsee’s? They must find at least 5 new scripts of unannounced films, all with clutter-breaking stories, trendsetting female characters and relevant social messaging. 🤘🏽

Previous articlePollard Smashed Six Sixes In An Over !! Mumbai Indians Can’t Keep Calm
Next articleJaspirit Bumrah Getting Married With Anupama This Week ??

The Bigg Boss Tamil episode had the slaves in the house continuing their task. Senrayan again tries to convince Nithya about getting together with...

Karthick Subbaraj Opened About A Deleted Dialogue From “Mahaan” !! WATCH

In an interview with a youtube channel, director Karthick Subbaraj opened about a dialogue that he had to delete from he movie. The filmmaker...