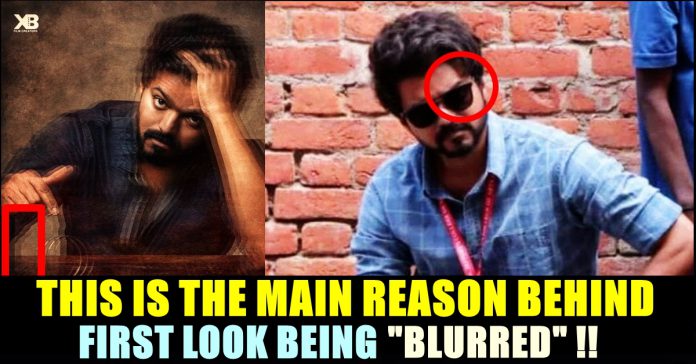 The most awaited first look poster of actor Vijay’s upcoming film released on 31st of December. The makers who tentatively titled the film as #Thalapathy64, revealed the original title as “Master”. Few months ago, the film commenced with a customary pooja in Chennai with Vijay, Vijay Sethupathi, Malavika Mohanan and Shanthanu Bhagyaraj and the rest of the crew in attendance. Directed by Lokesh Kanagaraj, the film is touted to be a gangster flick with Vijay Sethupathi playing the villain.

The titled impressed the fans and followers of Tamil cinema as it broke the stereotypes of first look posters. Unlike other first look posters of actor Vijay, this one didn’t give any idea about the plot or genre of the film. The “blurred” effect was added in a way to tell the fans that it is going to be a director’s movie more than the actor’s.

“It is very connected to the core of the movie. Audience also know that there is something in the poster but they will get a clear idea once the other characters revealed” said designer Gopi Prasanna. Initially audience thought that the poster was designed in that way to tell that it is a view of the enemy who got thrashed by Thalapathy Vijay. But the makers denied it in a subtle way.

Now, a minute detail in the first look poster has grabbed our attention. In the left corner of the poster, we can see an object placed only to be cropped off from the frame. The object will give us an idea to understand why the poster was in a blurry way. Here’s the object that got cropped in the first look below :

Most of us believe that it is a hip flask filled with alcohol. As we all know that Vijay is playing the role of a college lecturer in “Master”. Now after seeing this semiotic, Vijay might be a drunk professor who got fed up with the educational system of our country. We can also think of the actor to be a drunk professor with dark past.

The shooting spot pictures of Vijay which got leaked earlier had the actor with a black cooler which might be used by him in the film to hide his eyes from his students and his colleagues in order to let them not know about him being a drunk at working hours.

Are you ready to witness a Drunk Master in theatres coming April ??