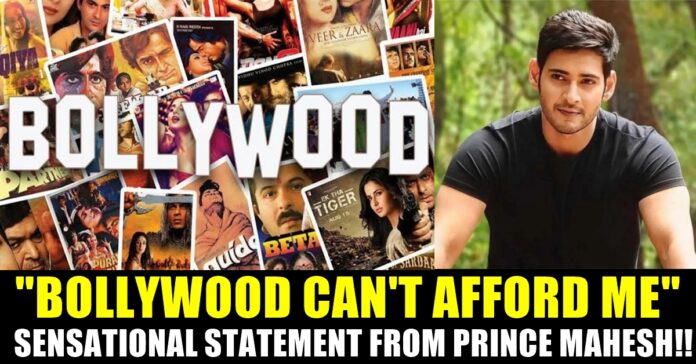 Telugu Superstar Mahesh Babu’s statement about acting in a Hindi language film has grabbed headlines. During the media interaction that took place in the trailer launch of Advi Sesh’s marriage, opened about making his debut in Bollywood film industry.

The Telugu actor with huge fanbase said that the Bollywood film industry “can’t afford him” and added that he wouldn’t waste time doing a film in Hindi language. Mahesh is waiting for the release of his “Sarkaru Vaari Paata” directed by Parasuram Petla. The film is expected to hit the screens of 12th of May.

“I did get a lot of offers in Hindi, but I don’t think they can afford me. I don’t want to waste my time working in an industry which can’t afford me. The stardom and respect (South, mainly in Andhra) I get here is huge, so I never really through of leaving my industry and going to some other industry” Mahesh Babu said in the interaction.

“I have always thought of acting in films and becoming bigger. My dream is becoming true now and I can’t be happier” he further added.

Earlier, Kannada actor Kichcha Sudeepa, at a trailer launch said, “Someone said Pan India Film was made in Kannada. I would like to make a small correction. Hindi is no more the national language of India. They are doing Pan India films today. They are struggling by dubbing in Telugu and Tamil and not achieving the success. Today we are making films that reach everywhere” the senior actor said.

This statement from Sudeep emerged after Home minister Amit Shah urged the people of India to use Hindi as an alternative language to English. The statement created outrage among the people and political leaders of the country who believe that the country is known for it’s unity in diversity.

Reacting to the statement of Kichcha Sudeepa, Bollywood actor Ajay Devgan who is known for acting in Hindi films for several decades, questioned Sudeep why he is dubbing his films in Hindi if he feels Hindi is not our national language.

He also made a statement saying that Hindi was, is and will be India’s national language. This statement from Ajay irked many users of online platforms who came up with comments slamming him for his baseless claim.

Previous articleVenkat Prabhu Trolled A Fan Who Accused Him Of Copying “Maanaadu” From “A Day”!!
Next articleJUST IN : Dhoni & Nayanthara Joining Hands For A New Tamil Movie ??

BIGIL Not To Release On Diwali Because Of Assistant Director KP Selvah ??

The Most Awaited Response Of Kamal !! Here’s What Fans Demanding From Him !!