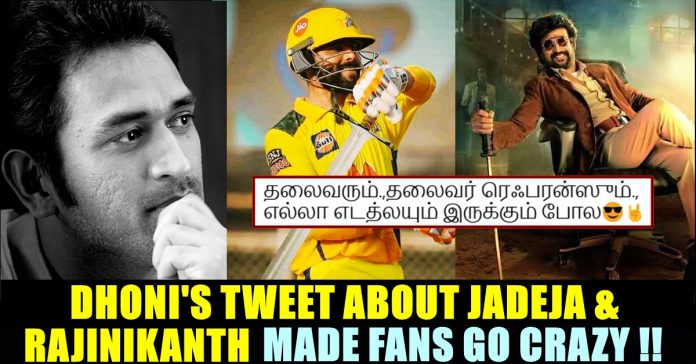 Ravindra Jadeja who is fondly called as “Sir” Ravindra Jadeja by the fans of cricket, grabbed the headlines through his terrific performance in the league match that took place between Chennai Super Kings and Royal Challengers Bangalore. The left hand all rounder scored 62 runs with a strike rate of 221 and created a record of scoring 36 runs in the last of CSK’s batting innings. He also picked 3 important wickets by giving away just 13 runs in the four overs he bowled. He also bowled a wicket maiden and caused a run out of Daniel Christian.

The cricketer’s performance helped CSK to register a 69 runs victory and the team has topped the table in style. Crores of fans including celebrities from various significant industries from across the world are celebrating the victory of the yellow team. Meanwhile, an 8 year old social media post of CSK captain Mahendra Singh Dhoni comparing Superstar Rajinikanth and Ravindra Jadeja started trending now.

In the tweet which was uploaded on 9th of April 2019, Dhoni says that God created Ravindra Jadeja after realizing that Tamil Super star Rajinikanth is getting old. “God realised RAJNI sir is getting old so he created sir ravindra jadeja” reads the tweet of the world cup winning captain.

As soon as Jadeja displayed the performance of his lifetime in the match against RCB on Sunday, fans started reacting to this old tweet of Dhoni in various ways. Check out some of the reactions below :

He score runs.
He take wickets.
He take blinders.
He run-out batters
He break stumps.

He predicted when no one knew about Jadeja! https://t.co/x0afhl4xVf

“I have been working a lot on my fitness, skill and everything else, luckily, it paid off today. It’s tough as an all-rounder, you’ll have to do well in all departments – while training, I don’t do all the three things (batting, bowling and fielding practice) on the same day. I work on my skills one day and my fitness on the next day – that’s how I manage my workload. I was looking to hit hard in the last over, Mahi bhai told me he (Harshal) will be bowling somewhere outside the off-stump and I was ready for that. Luckily I connected with everything and we managed to reach 191, that was a crucial over from our side.” said Ravindra Jadeja after receiving the Man of the match award in the match against RCB.