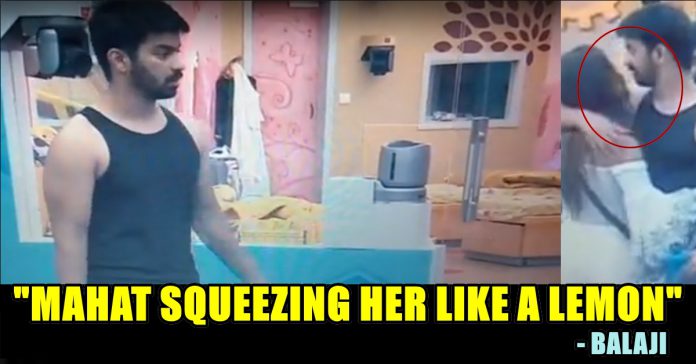 Bigg Boss Tamil housemates are currently doing the Save Water task. The Red team has has almost reach the rim of the tank and the morale has plummeted in the yellow team. Everyone is tired after performing the task till late night.

Mumtaz calls Aishwarya and tells her that she feels uncomfortable when Sharik lies down in the bed with her. She says she could have raised her voice the previous night, but she did not because this didn’t need more attention. Aishwarya tells her that she won’t repeat it, but then goes to tell Sharik what Mumtaz told her. She rants why Mumtaz said that when nothing happened except them hanging out. The arguments between Yellow and Red team continue in the background. Daniel finds out that utensils have not been washed properly yet again. When he asks Mumtaz, she says that he is being aggressive.

Bigg Boss holds two other tasks before the save water luxury budget task comes to an end. The day ends with Bigg Boss sending a birthday cake for Mumtaz and the housemates celebrate before retiring to bed. The Bigg Boss Tamil housemates are abmellowed bunch compared to the previous season and a few of the housemates are also holding themselves back. They are playing the game cautiously.

Meanwhile a weird video caught on Internet about the most controversial housemate “Mahat”. In the video he is seen applying “lip balm” or it is not clear that it also may be “lip gloss” or even a “lip stick” near his bed. He also looks himself in the mirror few times before going to the kitchen table where Yaashika standing. He approaches to the  kitchen table with empty water bottle in his hand. Holding his mic in the other hand Mahat goes near the water can , other housemates including Danny, Balaji, Senrayan standing around the dining table along with Yaashika.

Mahat slowly moves towards Yaashika and hugs her gently where he holds the mic and water bottle in the hand. He also kissing her where Danny roles his eyes and giggles with Balaji. Balaji interrupts them and cracks a joke by comparing Mahat to Juice squeezing machine and Yaashika as lemon. He also demonstrates how Mahat squeezing Yaashika like lemon to which Danny trolls Balaji.

What do you think on this bizarre incident ??

India vs England, Glenn Maxwell, Yuzvendra Chahal, troll, Neymar Internet is always ready to have some fun and it didn’t miss the chance when...

“Boycott IPL” Is Trending After India Almost Got Eliminated From Asia Cup !!