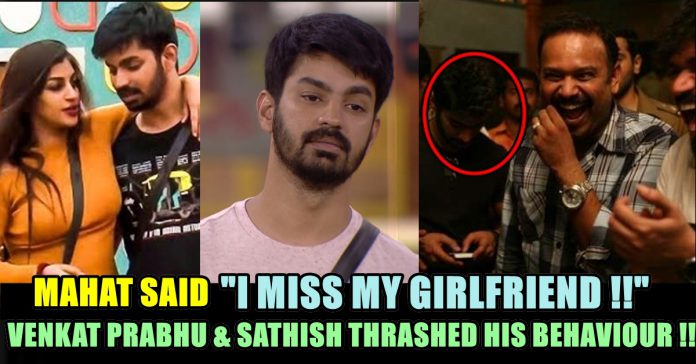 Mahat Said “I Miss My Girlfriend !!” Venkat Prabhu & Actor Sathish Brutally Thrashed Him For His Behaviour Inside The House !!

Bigg Boss housemates are currently performing the luxury budget task of the week, for which they are divided into two teams and are asked to save as much water as possible by positioning their hands to cover holes and stop leakage.

The yellow team and red team keep picking on the opposition teams every time they speak in English. This way, each team tries to increase the water level in their tanks. While performing the task, Balaji accuses Riythika of overhearing a conversation, when all she did was to ask the house captain, Vaishnavi about a doubt. The task is taken too seriously by the housemates as each of them is prone to losing points. Mahat tells Mumtaz that she should stop talking in English or simply stop talking if she is going to continue to give away points to the opposition team.

Vaishnavi is accused by Balaji of making the members of red team speak in English by incessantly talking to them. The other team members don’t agree and move on. Mumtaz receives a secret task to undermine her team and bring down the water level. If she succeeds in the task, the housemates will get full points for luxury budget and Mumtaz will also get a special power.

This leads to a heated argument among her teammates Daniel, Mahat and herself. Yet, she succeeds. The red team is in the lead and are just three buckets away from filling their tank completely. Later, Bigg Boss announces the halt of the task for the night with a siren. At the tasks getting completed the teammates are ordered by Bigg Boss to dedicate a symbol of love heart to their beloved ones who are watching the show. Everyone got emotional while talking about their loves ones. Almost every house mate shed tears and special mentions to Rythvika, Mumtaz , Nithya , Danny and Vaishnavi. They spoke their heart out and shed tears.
While Mahat ought to give the heart, he dedicated it to his elder sister. When he started his speech he said “First, I’m missing my girlfriend”. The whole time when he is giving talked about his loved ones Yaashika is the one for whom they got their focus on. It is obvious that everyone would be puzzled by the way Mahat behaves as he openly kept romancing Yaashika throughout all the time which is evident through the videos, promos and the show but when it came to confession he frankly said that he is missing his girlfriend without hesitation.

For his statement actor Sathish a big follower of Bigg Boss tweeted immediately. Here is his tweet :

He said “Are you really missing your girlfriend ?? It does not look like it after watching all you are doing inside the house” . For this tweet Director Venkat Prabhu who launched him in Kollywood through the blockbuster film “Mankatha” replied. He said “Only because of missing his girl friend he is behaving that way” which received a hell out of response from the audience. Check his tweet below : Sathish does not missed to reply Venkat Prabhu’s counter. Check his reply below :

Sathish replied as “Yes. Yes. Maintain this way to everyone who asks”. This hilarious conversation received a huge response form the audience. Check out some of the best comments here :

What do you think on Mahat’s statement and this hilarious conversation ??

Previous articleVignesh Shivan Wants Dhoni To Become The Prime Minister Of India !! “I Don’t Mind The Trolls” For This He Says !!
Next articleCelebrities Wished Dhoni On His Birthday !! But Sehwag Tops All Of Them In His Own Way !!

Amidst the controversy that are doing rounds surrounding Ilayaraja's comparison between Dr. Ambedkar and PM Narendra Modi, his son Yuvan Shankar Raja came up...