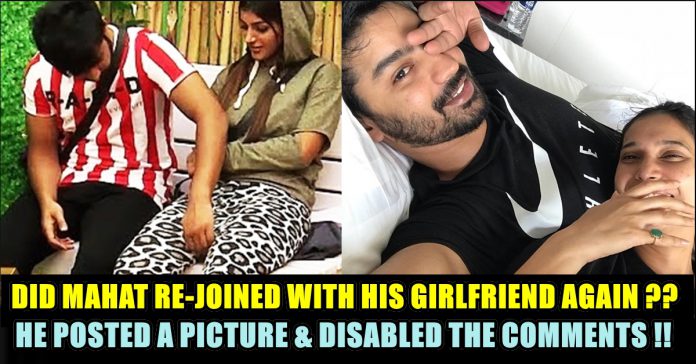 Mahat Posted A Picture With His Girlfriend Prachi & Disabled The Comment Section !! Did They Re-Joined ??

Earlier to our shock as the effect of  Mahat’s confession about his love with Yashika, Prachi announced that she is no more with Mahat. She also worried about Mahat being so mean to Mumtaz. She wrote it by attaching a video she made with Mahat before he entering inside the house.

This latest Instagram post of Mahat is shocking where he has posted a picture of his girlfriend Prachi Mishra with the caption “The love of my life! She means the world to me”

In other case Prachi is not even following Mahat’s official Instagram account which looks like something still unsolved going between them. Maybe Mahat posted this old picture of them to please Prachi in a way of remembering their love. And in his twitter Mahat is seen sharing the tweets of some of his fans who says that they find Bigg Boss boring without him.

Previous article“Comparing To Janani, Her Sister Is Looking Too Good !!” Said Married Rio !! Check Out Fans Reaction !!
Next articleHere’s The Amount Released By Modi Government For Manual Scavengers Rehabilitation In These 4 Years !! SHOCKING !!

Tamil Actress Can’t Keep Calm After Receiving One “Like” From Jaddu !!

Sunny Leone is currently enjoying a holiday in Cancun, Mexico, with her husband Daniel Weber and their friends. She gave fans a sneak-peek of...

Official twitter handle of Coimbatore Police, on Saturday, came up with a press note, updating about the action initiated in the case against a...