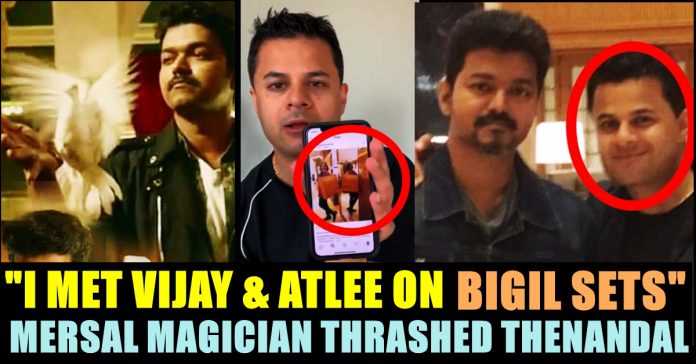 Director Atlee’s Mersal was a magnum opus that fetched over Rs 200 crore at the box office. The film, which had Vijay in three different looks, spoke about corruption in the medical field. The film courted controversy for criticising Demonetisation and GST.

After over a year since its release, the makers of the film is in the news yet again for not paying a worked who worked for the film. On November, Popular magician Raman Sharma, in a series of tweets, revealed that the producers of Mersal (Thenandal Films) haven’t paid him his remuneration yet. The guy who is a magician by profession played a scene from the movie “Mersal” and said that the production house of the film owe him 4 lakh rupees for his work in the movie.

Now in the video he posted today, Raman has said that he came all the way to Chennai from Canada on April 2019, to hire a lawyer and to file a lawsuit against the production house. Raman says that he also met Vijay and Atlee in the sets of BIGIL and he says that hadn’t told them about the issue he is having with Thenandal films as he thinks that there is no necessity to drag them into this matter.

WATCH THE VIDEO OF RAMAN HERE :

Raman also added that he met few other people on the sets of BIGIL who worked in “Mersal”. He seems to have learnt that they too had not been paid completely yet for working in the film.

Raman says that few people told him that Thenandal producers are not doing well financially since the release of the movie. To prove them wrong, Raman showed an Instagram post of Thenandal chief Hema Rukmani where she posted a picture of herself with a caption saying “Whoever said money cant buy happiness, simply didn’t know where to go shopping – Gertrude Stein”

Check out some of the reactions for his video :

They have no money bro so dontwaste your more money in the court expenses .leave it 🚶

Previous articleSamantha Got Trolled By Her Own Fans For Posing Like This In This Recent Post Of Her !! Check Out!!
Next articleThis Telugu Fan Trolled Vijay & Ajith For Criticizing “Saaho” Film !! Got Ripped Apart In Pieces By Thala Thalapathy Fans !!

Youtube channels related to various fields have emerged in large numbers in India recently. Purpose of most of them is to entertain the subscribers...