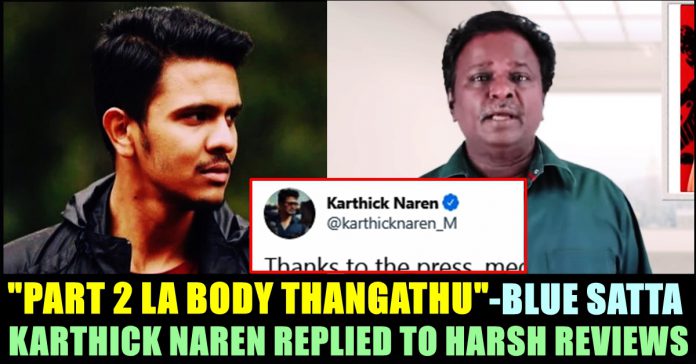 As the lead actors of Mafia are very much busy in responding to the reviews of their film, the filmmaker has reacted for the first time to the outcome. Mafia is a gangster film having Arun Vijay and Prasanna in the lead roles. The film’s music was composed by Jakes Bejoy, while cinematography and editing is handled by Gokul Benoy and Sreejith Sarang respectively. The filming completed on 29 August 2019. The film was released on the 21st of February 2020.

As soon as the film released, reviews poured from all over the Internet. Though many fans who watched the film praised it, a set of fans also criticized the film. Blue Satta Maran, one of the prominent reviewer of Tamil films expressed his disappointment over the film and Video jockey Abhishek also pointed out the flaws in the majority part of his video review. One of the common factor that didn’t impress the fans is the way the makers used the effect slow motion.

Check out the reviews here :

Thanks to the press, media & audience for receiving #Mafia very well. Have been reading all the reviews, came across few constructive & few harsh criticism. Everything has been duly noted on a positive note. Unlearning & learning again 🙂

Karthick Naren impressed audience with his debut film D16. Though he is struggling to release his second film “Naragasooran” due to financial issues, the filmmaker is now busy in the promotional interviews of his third directorial “Mafia” in which he casted Arun Vijay and Prasanna as protagonist and antagonist respectively.

The filmmaker who is just 25 years old answered to the questions of the reporters in a most intelligent way, in the first even press meet of Mafia. When one of a reporter asked him to open about the issue he had with filmmaker Gautham Vasudev Menon, Karthick said that is just an experience and he intends to approach that matter in a positive way.

It is notable that Prasanna also responded to negative reviews in a similar way. His reply to one of a fan went viral across the internet :

Comment your views on the way the crew is responding to negative reviews !!

In an unexpected turn of events, Junior Kuppanna located in Nungambakkam faced an accusation from their customer about serving rotten Biriyani. Karthik who went...

Man Who Cheated More Than 100 Women & Extorted Money Got Arrested !!

A 26 year old youth from Nagercoil has been arrested for betraying more than 100 girls in the name of love. He mostly targeted...

After asking actress Krithi Sanon whether she accepts Alia Bhatt as the best actress in the world in a most recent episode, Director Karan...