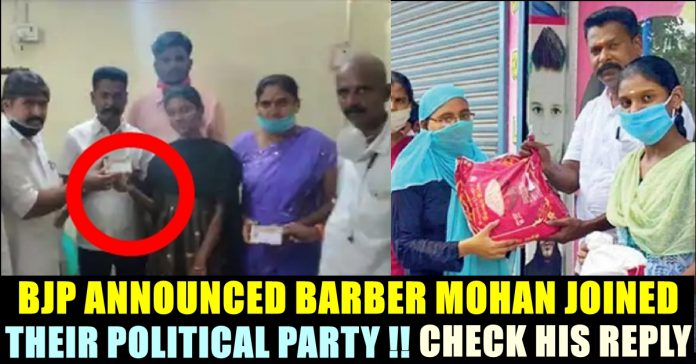 Prime minister Narendra Modi heaped high praise on a Madurai Barber for helping out poor people in this lockdown situation is a national news now. In his monthly radio broadcast, Maan ki Baarat, Prime minister of country India referred to C.Mohan’s contribution to poor people who suffered without basic needs.

Mohan spent the money he saved all these days for his daughter’s higher education, to more than 1500 families of Melamadai who needed it the most. M. Nethra, 13, daughter of Mohan who is working as barber, on seeing people starving and pleading for help during the lockdown, requested her father to do something for them. “She insisted that we give away the money we saved for her education. She told that she would study hard and become IAS officer to serve society”, said Mohan to media.

Though he is not earning during this lockdown, Mohan along with his family donated rice, vegetables and groceries to nearly 1500 families. Apart from spending the money he saved for his daughter’s education, Mohan continued feeding the poor by using his wife’s jewellery. “So we have donated around Rs.8.5 lakhs to the needy” he said.

Mr. Mohan said that he has a habit of saving a portion from his daily earnings. He told media that he was cheated by some acquaintances who took away Rs.30 lakh of his hard earned savings. “At that time, I was left with no money and struggled to feed my family. When people ask for help during this lockdown, I could completely understand as I have felt the hunger” he said. For this generous gesture, Mohan got highly appreciated by the users of social media platforms. Director and actor Parthiban expressed his gratitude as well.

The amount Mohan spent for the poor and needy who are affected by this lockdown, has been saved by Mohan since 2013 for his daughter’s education. “Our experience have taught us that money is just a part of life and is temporary in nature. Since we had some money saved, we gave it to the poor” he said.

As soon as Modi praised him in his program, many reports from media portals suggested that Mohan and his wife joined BJP party. Leader of Tamilnadu BJP, Murugan contacted Mohan and appreciated him for his generous gesture. A statement from a BJP spokesperson said that Mohan joined BJP party with his family in the presence of district leader K.K Sreenivasan.

Now, Mohan has denied the news and said that he received the BJP member card by thinking that it is a card for appreciation. In his interaction with News 18, Mohan, reportedly said that he is neutral to all the political parties and requested media and politicians not to restrict him by relating him with a particular political party. He further said that he got depressed on hearing about the news about himself joining in BJP party, according to News 18.