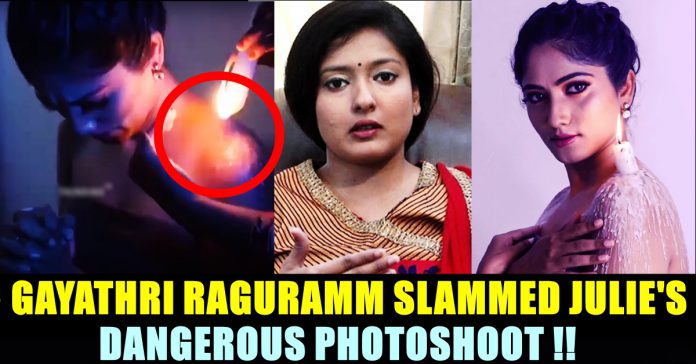 In this internet era, Photoshoots are playing a major role for the aspiring actors and models in the growth of their career. Even high profile actors such as Samantha, Vijay Sethupathi are participating in photoshoots occasionally to build their profile. It helped many forgotten actors to make their re-entry into film industry as well. One of the best examples in recent times is Ramya Pandiyan and Divya Duraisami who became internet sensation through their simple photoshoots in their terrace.

When Ramya gained widespread acclaim and got the opportunity to feature in Vijay TV’s “Cooku With Comali” with her photoshoots, Divya Duraisamy, a news anchor by profession went one step ahead and bagged a movie opportunity. She is going to be make her debut in reputed filmmaker Suseendran’s next venture which is going to have actor Jai in the lead role.

Check out the lockdown photoshoot that actor Vijay sethupathi got himself involved in :

Meanwhile aspiring actress and former Bigg Boss contestant Julie who has been conducting photoshoots with modern and traditional attire, to impress fans, followers and movie producers, recently cleared air on her alleged relationship with a North Indian business man. Now, unlike other heroines, Julie went one step ahead risked her skin to execute innovative poses to gain wide attention. Senior actress and her Bigg Boss co-contestant Gayathri Raguramm scolded Julie and advised her not to involve in such activities.

Julie became a familiar face among Tamil speaking netizens, not only through Bigg Boss show but through the videos that circulated during the historical protest of Jallikattu. She gained a huge sum of support from the protesters for her participation in the protest. The way she led a crowd through her slogans attracted many people’s attention which resulted in Julie becoming one of a contestant in Tamil reality game show Bigg Boss, hosted by Ulaganayagan Kamal Haasan.

Check out the pictures of Julie from the photoshoot :

Every candle deserves great respect because they light us by burning their bodies and destroying themselves! A candle in your hand is better than a star in the sky. Your soul is like a candle; when lit by love, it shines. #candlephotography pic.twitter.com/YR16nVhIyq

In a making video of this photoshoot which was released by Julie herself, we could see a man pouring a burning candle’s waxes on her shoulder to make her look like a Wax toy in his photographs. Watch the video here :

On seeing this video, Gayathri Raguramm, a popular dance choreographer and senior actress termed the activity of Julie as “madness”. She who asked her not to do it anymore, tried to make her realize that all the human beings are beautiful the way they are. “Madness. Don’t do that anymore. Ur beautiful the way u r.” read the comment of Gayathri.

Madness. Don’t do that anymore. Ur beautiful the way u r.

Many online users also criticized this activity of Julie. After her Bigg Boss stint, trailers and first looks of her films emerged but failed to hit the big screens. She even hosted few dance shows in Kalaignar TV after Bigg Boss but couldn’t get the break that she desperately needed.

Previous article“Why Is Even Following Her?” Netizens Questioned Modi !!
Next articleHere’s What Vijay Said When He Was Asked To Act As “Villain” In A Mahesh Babu Film !!

Netizens Want Kamal Haasan To Take Action Against Azeem For His Behaviour!! WATCH

Bigg Boss contestant Azeem's recent behaviour of disrespecting his co-contestants and yelling at them has made viewers of the show to demand host Kamal...

As soon as Vanitha married to Peter Paul, an aspiring filmmaker, his wife Elizabeth Halen has filed a police complaint seeking legal action against...