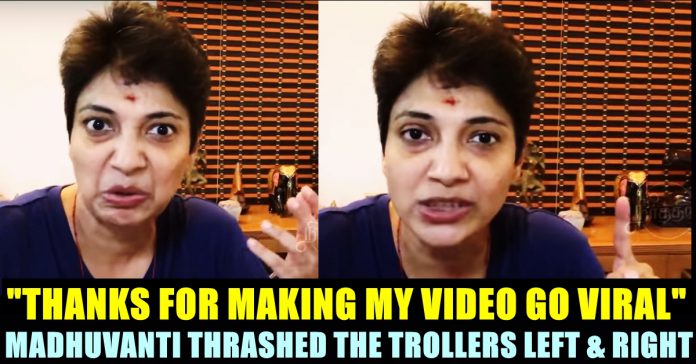 A recent video of actress and BJP supporter Madhuvanti went extremely viral across the social media platforms, not for the content she provided in the video, but for a couple of blatant blunders she did. Now, the daughter of popular actor Y.G Mahendran came up with a clarification video, apologizing for what she said in her video. She also asked few questions to those who made the video viral.

“In a video I posted wo three days back, I have made a mistake. It is a mistake I shouldn’t have done but it was a human error. I take the whole responsibility for the mistake. I won’t blame anyone for a mistake I have committed. I shouldn’t have said 8,000 crore people. I will be careful in the future and will give appropriate informations in my video.” said Madhuvanti who went on to ask few questions to the Netizens who made her earlier video viral.

“I have been doing several videos for past few days through a series named as “Be Positive” without a single mistake. Why you people didn’t make it viral ?? In the same video, except that one mistake, all I said was good informations. Why can’t you make it viral ? So you will make one viral only if they commit a mistake. right?” She asked to the people.

Madhuvanti further accused few popular politicians without mentioning their names for making mistakes on air. She questioned why they didn’t release any apologize video till now. “But I accept my mistake, because I am an Hindu” she says in her video.

Madhuvanti also thanked those who made her video go viral. “It is a video I made only for my closed groups. You guys made lakhs of people to watch it. Among that 1 lakh people, at least 10 people would have thought that there is truth in my speech. Those 10 people are enough for me.” said Madhuvanti who referred a famous dialogue from Kamal Haasan’s popular film “Virumaandi”.

Madhuvanthi got severely criticized for several number of netizens for saying that 8000 crore people are benefitting from Modi’s one of a scheme.

“Through Jan-Dhan scheme, Government of India has credited Rs. 30,000 crores for the people of India. On Saturday, among that 40 percentage of Rs.30,000 crores which is Rs.20,000 crores of money has been credited to women. This is an authentic information from Times of India, I request you all to read” she said in her video.

Watch that video below :

This clarification video from Madhuvanti is also started going viral in social media platforms with various kind of reactions. Comment your views below !!

Along with hashtags ""PSBB", "Ban PSBB", a number of twitter spaces took place during the evening of Monday regarding the complaint that emerged against...