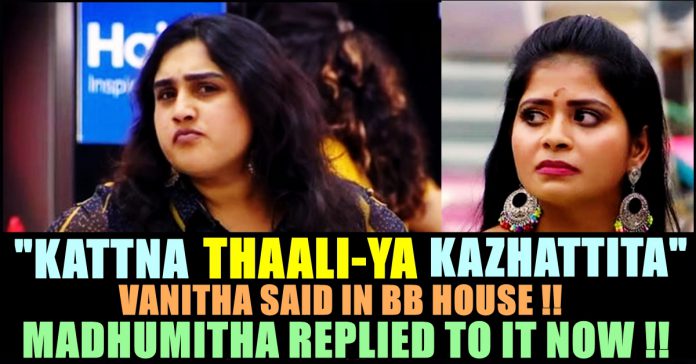 After that controversial press meet where Madhumitha accused Abhirami & co for their behaviour inside the house, she has now appeared in a new interview with Nakkheeran. She answered to many questions asked by the anchor regarding the issue she faced while being inside the Bigg Boss house.

Madhumitha’s latest interview to media houses received widespread outrage as she accused the contestants inside the house for “Gang-Harassment”. After her controversial termination, Madhumitha opened for the first time about her issues with the Vijay Television management.

On seeing her interviews and the way she behaved inside the Bigg Boss house, many people asked why she removed her “Thaali” before participating in the game show when she cares so much for “Tamil culture”. To this question, Madhumitha said that it was Bigg Boss authorities who asked her to remove it as it would disturb the mic she is going to wear.

“After that I insisted that can’t be without wearing my “Thaali” for 3 long months to which they convinced me by saying that there would be many physical tasks which might cause damage to my “Thaali” and to my neck as well. Then I discussed about it with my husband after which I accepted to remove it” she said in the interview.

WATCH THE FULL INTERVIEW BELOW :

Apart from that she also shared about many incidents that she went through inside the house. She elaborated on her confrontation with the 8 other contestants about the Cauvery issue as well. Madhumitha alleges that those 8 contestants denied to do any work in the house as she appointed as captain of that week.

She also talked about the people support she is receiving after her termination. “Many people registered case in a way of supporting me. The people support I am getting is enormous” she said.

Madhumitha clearly says that she has been harassed by the gang which consists of 8 members on that day of the incident happened. Even after cutting her hand, no one cared for her according to her statement. She thrashed the contestants for their behaviour on that day and expressed her gratitude for Cheran and Kasthuri.

When she was asked why she talked about Abhirami’s clothing in a public forum, Madhumitha said that she expressed on the matter in that way only because of the “Tamil Ponnu” topic. “I didn’t intend to attack a personal or to degrade them” she added.