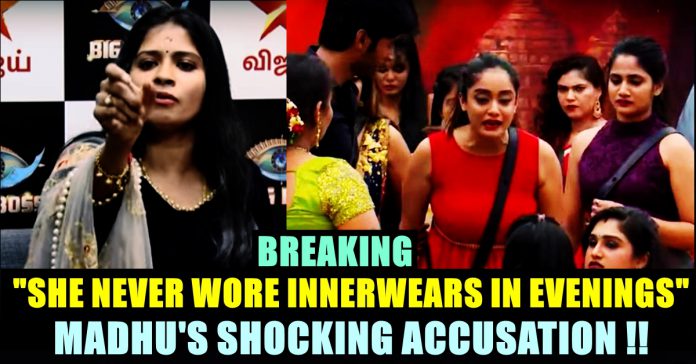 After her controversial termination, Madhumitha opened for the first time about her issues with the Vijay Television management. The actress who denied to open on what happened to her inside the Bigg Boss house in an earlier press meet, has revealed every bit of it in this today’s episode.

“She started loving Kavin initially, after his rejection she transferred her love on Mugen the next day and gives birth to bottle baby on the 6th day. It disturbed me a lot while being inside the house which made me to confront against her.

For the uninitiated, Madhumitha terminated because of hurting herself. While talking to Cheran about the swimming pool being empty as a sign of water scarcity in Tamilnadu, Madhumitha reportedly said to him “Varuna Bhagavan kooda Karnataka Kaarar Pola Thanner Tharamal Vanjikiraar” (Even Varuna Bhagavan is cursing Tamilnadu like Karnataka people by not providing water).

This statement from Madhumitha irked Sherin who immediately confronted her for talking ill about her state. Kavin, Mugen, Sandy, Losliya, Tharshan who were already involved in argument with Madhumitha started opposing her statement it seems. Even few contestants told Bigg Boss that they would evict themselves from the house if Madhumitha stayed. Bigg Boss sent a letter to Madhumitha and said that there should not be any conversations about politics. “This added the fuel in the fire. They started making fun of me to the extreme” said Madhumitha in the interview.

At one point, to prove that her care for Tamilnadu state is true, Madhumitha hurted her wrist with a sharp tool. According to Madhu’s statement no one in the house except Cheran and Kasthuri paid attention to what Madhumitha did which is evident through the conversation between Kamal Haasan and Kasthuri is weekend episode.

What do you think on this interview of Madhumitha ?? Comment your views below !!

Previous articleVanitha & Kamal Haasan’s Conversation Are Pre-Planned ?? Shocking Tweet From Kasthuri !!
Next articleSakshi Asked “Sorry” After Coming Out Of BIGG BOSS HOUSE For Calling Public As “Dogs” !! Check These Reactions !!