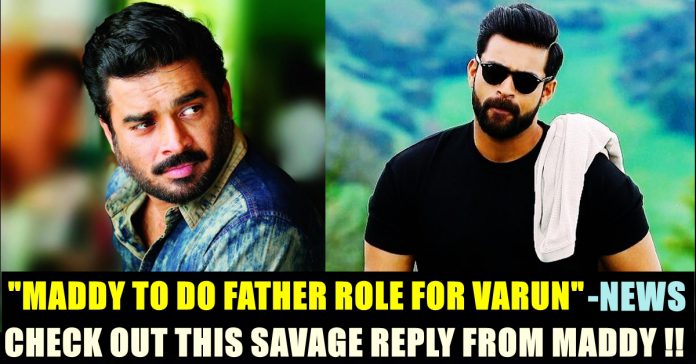 Madhavan To Act As Father For This 29 Year Old Actor ?? Check His Reply !!

Actor Madhavan is super active in twitter which is making his fans super happy. Having around 27 Lakh followers, Madhavan has been interacting with his followers often. The actor who made young girls to fall for him in early 2000s, is now winning hearts of them with his humbleness.

Madhavan who made his last appearance in Tamil through Vikram Vedha as one of the lead, also did a cameo in Magalir Mattum, a Jyothika starrer. Now a recent buzz said that the actor is going to do a role of a father for Telugu actor Varun Tej. Varun Tej is an emerging actor in Telugu film industry and was last seen in the remake of “Jigarthanda” remake. As Madhavan is known for his experimental roles, many believed the buzz and started inquiring the actor about the same in social media platforms.

One of a fan who couldn’t believe the news, tagged the actor and asked “Whattttt???? 😱 Really?? @ActorMadhavan Hope it’s fake!!” by uploading a post regarding the same. Check out his post below :

On seeing this post, Maddy who got shocked immediately responded with a denial saying “Totally fake bro. 🙈🙈I am still a kid man .. 🤪🤪🤪”. Check out his tweet here :

This tweet from Maddy received so many reactions and went viral. Many of his fans accepted the tweet and one of them wrote “We too don’t accept you as a father for a hero. Father for below 5yrs kid is ok.”. Check out some of their reactions below :

We too don't accept you as a father for a hero. Father for below 5yrs kid is ok. But not like a hero

What do you think on this reply gave by Madhavan ?? Comment your views below !!

Previous articleVanitha Vijayakumar’s Heart Melting Wishes To Arun Vijay On His Birthday !!
Next articleWho Should Be The CM Candidate ?? Actress Opens !!

Prithi Narayanan, wife of renowned Indian cricketer Ravichandran Ashwin shared a series of Instagram Stories in her handle from a page which explains about...

In a barbaric incident, the burnt body of a civil engineering student identified as Madhu has been found in Raichur shocking the conscience of...