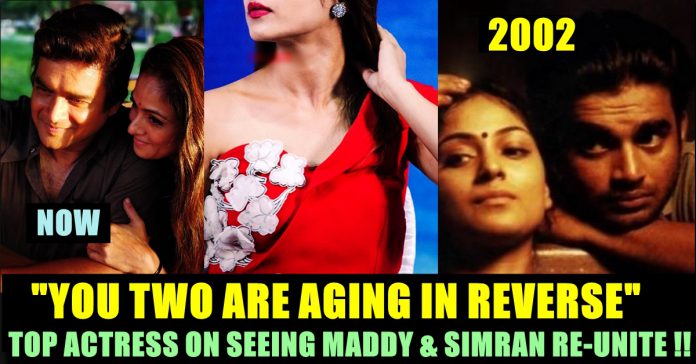 Rocketry: The Nambi Effect is an upcoming Indian biographical drama film based on the life of Nambi Narayanan, a former scientist and aerospace engineer of the Indian Space Research Organisation who was accused of espionage.

Actor Madhavan has been extremely busy with his upcoming flick, Rocketry: The Nambi Effect, ever since he took over as the director. Earlier, he was co-directing the film with Anant Mahadevan. Due to undisclosed reasons, the latter had opted out of the film, leaving Madhavan to take over as the director. The actor-director is currently in the US shooting for the film. Madhavan took to social media to share a beautiful set of pictures. He revealed that actress Simran has been roped in to play Mrs Nambi Narayanan in the film. Madhavan and Simran had earlier teamed up in films like Kannathil Muthamittal and Parthale Paravasam.

For the uninitiated, Thiru and Indira are the characters Madhavan and Simran played in Mani Ratnam’s Kannathil Muthamittal, which released 17 years ago.

Madhavan also thanked Simran for being part of the project. In his tweet he wrote “You are much more of a Diva and an angel as you ever were .. it was such a privilege to work with you again.. sad that it s a film wrap for you my lady. The unit and I miss you.”

You are much more of a Diva and an angel as you ever were .. it was such a privelege to work with you again.. sad that it s a film wrap for you my lady. The unit and I miss you. https://t.co/zmHiP8GQaf On seeing these pictures of Madhavan & Trisha, Actress Trisha who worked with both of them stunned on seeing the actors being so young after all these years. Trisha paired with Madhavan in the movie Lesa Lesa and was a co-star of Simran in Petta. The pictures Maddy shared goes viral in social media with lovable captions and comments in which many people felt the nostalgic. Few compared their pictures together in Kannathil Muthamittal with the current pictures as well.

What do you think on this pait teaming up again ? Comment your views below !!

Previous articleThis BIGG BOSS Tamil Celebrity Got Married & The Way She Announced It Is Just Awesome !! I
Next articleInstead Depending On Government, Watch How Residents Of Chitlapakkam Decided To Face Water Crisis !!

All of us would have received a text message claiming that we have won a huge sum of amount for our cell phone contact...

Anupama Parameshwaran who is known for appearing in films like Premam, Kodi got irritated on seeing her pictures getting morphed and expressed it through...