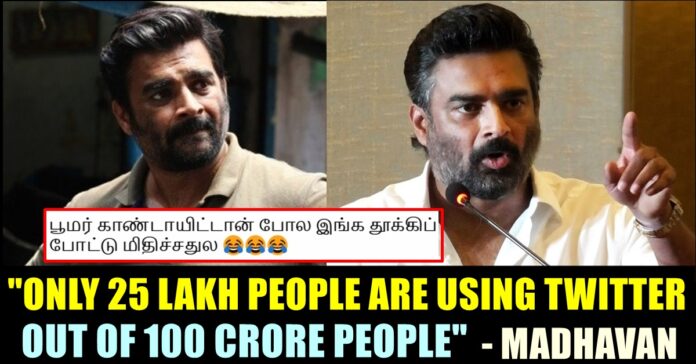 Madhavan Reacted To The Trolls & Criticisms On “Panjangam”!!

Madhavan, in a recent interview for the promotion of his upcoming film “Rocketry : The Nambi effect”, talked about the percentage of people in the country who use twitter. The actor said that only 25 lakh out of 120 crore people are using twitter and it is believed that the actor is reacting to the trolls and criticisms he faced due to the statement he made on the usage of “Panjangam” in ISRO.

Madhavan, in a recent press meet, said that the scientists at ISRO relied on the Panchangam (Hindu almanac) to launch the Mars mission precisely. In his long speech, Madhavan talked about the three engines that are used to launch the rocket and explained about how foreign countries lack what advantage we have through “Panchangam”.

As a result of the actor’s speech, Mayilswamy Annadurai, famous Indian scientist who is known as Moon man of India, n an interview with Thanthi TV, has said that “Panjangam” won’t help in landing satellite in Mars planet as it was found 1000 years ago.

“Almanac is something that is used across the world but experimenting a space travel with the use of to in Mars which was found 1000 years ago is impossible” said the ace Indian scientist. “We use a different Almanac which is changing time to time. The Almanac we use was created after several scientific research and computer stimulation” Mayilswamy Annadurai said in the recent interview he provided to Thanthi TV.

“Considering the places where planets are located, the moving of the planets, the place where we are in the earth, how the PSLV would travel, we would send the rocket. There is no use of Panjangam nowadays” Mayilswamy Annadurai said.

Now, actor Madhavan, in an interview with Ramya Subramaniam for Film companion South, asked her what percentage of country’s entire population use twitter. When the host said that she thinks 15% of people using twitter, Madhavan denied saying that it’s just 0.2 %.

“But Ramya I would like to tell something to the viewers, especially to those who get very much influenced by the social media and twitter. What percentage of India you think is on Twitter?? I’m not asking you to shame, I’m just asking for what perception people have” Madhavan asked Ramya in the video.

When the host said that she thinks less than 15℅ of people are in Twitter, Madhavan denied saying “Its just 0.2%. It’s hardly 25 lakh out of 1.4 billion people. But the entire world is circulating by saying that Instagram and Twitter represents people. Why people are dying out of depression?” Maddy asked.