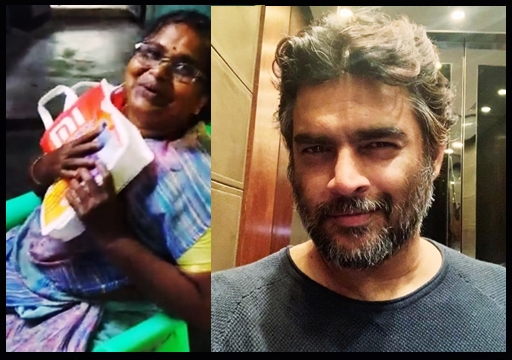 Pan Indian actor Madhavan got emotional on watching a video in Twitter which shows a  son gifting a new cell phone to his mother and making her happy like never before. The “Alaipayuthe” actor said that the happiness of the mother is priceless and added heart emojis to express his emotions. His tweet is going viral among the users of the micro blogging social media site with twitter users admiring the son and mother duo.

The video was posted by a twitter user named Vignesh Sammu on 5th of January and it has since collected six lakh plus views. He captioned the video saying “The price of that mobile was just Rs. 8800. But there is no price for the happiness my mother expressed. Birthday gift” in his tweet in Tamil.

“Adhula Irundha Mobile-oda Velai Verum 8800 Rs Dhan…! Aana Enga Amma Patta Sandhoshathuku Velayae Kidayaadhu. Birthday Gift..!” read is tweet, video of which shows her mother pumping up in happiness after unbloxing a new mobile phone and asks “Enna petha saami, endee ipdi panra kaasillatha samayathula” (you my love, why are you doing like this when you have no money)

The video garnered 30 k plus likes with thousands of shares from the users of Twitter. Actor Ranganathan Madhavan who happened to see the video, couldn’t resist himself from sharing the video from his official Twitter handle. He also added a caption saying “This happiness has no price” in Tamil. “இந்த மகிழ்ச்சிக்கு விலை இல்லை❤️❤️🙏🙏” read his reply tweet to the viral video.

Check out his reply tweet which garnered 14k plus hearts in no time below :

I don’t know why I got tears in eyes

Perhaps this is Tami, and I don’t understand it, but the feelings are well understood. Nice video.

Happiness has no language as well!!

Actor-turned-politician Kamal Haasan turns 65 today. The year also marks his sixty years in Indian cinema. He made his debut in films as a...