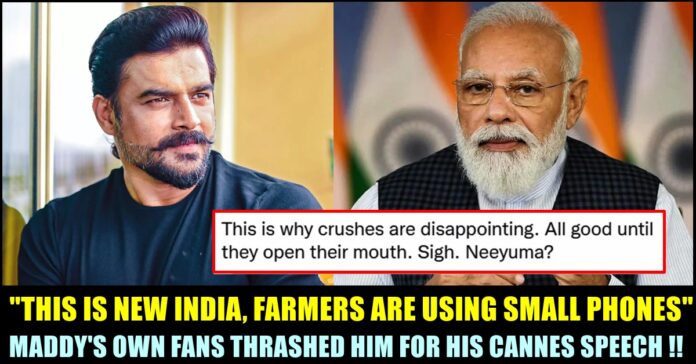 Actor Ranganathan Madhavan, at Cannes Film Festival, heaped praise on Indian Prime minister Narendra Modi by saying that his micro/digital economy. The actor said that the world predicted to become a biggest disaster but within couple of years India became the country with largest users of micro economy in the entire world. The statement didn’t go well with majority number of online users who started countering the actor’s statement by explaining about the struggles they faced due to the decisions made by the Prime minister of country India.

The actor made the statement while talking about his directorial debut “Rocketry : The Nambi effect” at the Cannes. Union Minister Anurag Thakur shared the video in his official Twitter handle as he also joined this year’s Cannes.

“When the Prime minister of India started his term, he introduced micro economy and digital currency. There was a furore around the world, among the economic community which said “This is not going to work, This is a disaster. How are you going to get the farmers and people who are uneducated in the small villages to handle a small phone or a smart phone and handle the accounting” the actor said. “Micro  economy was considered to become a big disaster” he added.

“In a couple of years, the whole story changed and India became one of the largest users of micro economy in the world and you know why it happened. Its because farmers did not need to be educated to use a phone to know if they have got their money they have sent to… That is new India” Maddy added.

When our PM @narendramodi introduced a micro economy & digital currency there was a furore…it is going to be a disaster. In a couple of years the whole story changed & India became one of the largest users of micro economy in the world. This is #NewIndia – @ActorMadhavan pic.twitter.com/yhuuZf8iHI

The video didn’t go well with majority number of online users, especially from those who admired Maddy as an actor. “This is why crushes are disappointing. All good until they open their mouth. Sigh. Neeyuma?” wrote a fan whereas another one said “How spineless and shameless has he become?! Damn…”

This is why crushes are disappointing. All good until they open their mouth. Sigh. Neeyuma? https://t.co/Z9b5yejTCt

How spineless and shameless has he become?! Damn… https://t.co/xUDwYVpEiE

How did he “launch micro economy” ? Please elaborate

And furore wasn’t over going digital. It was about the mindless demonisation that put the poor through untold misery

And the promised black money never came. Nor did the ₹15 lakhs

Genuinely wish to know what is micro economy?? Unless Mr. Madhavan meant micro economics. Are you’ll suffering from short term memory? in 2020-21 farmers protested for 378 days and 750+ farmers died. Which farmers are you referring to, let me guess you too are using teleprompter.

Madhavan is absolutely correct because Madhavan never had to stand in queues of ATM.

Didn’t have to care about converting his old notes running from counter to counter.

Didn’t have a care how his employer is going to pay him.

Madhavan used Paytm and it worked for him.

You might like to please Modi.
But listen to what the Reserve Bank of India says:https://t.co/T4zZTRw9RY
14.8% Failure Rate for Farmers!:( https://t.co/ofuyY7ujOQ pic.twitter.com/t83kzxOvsq

I think this fellow is confusing micro-economics (a proper branch of Economics as a subject of academic study) with a micro-economy. BTW Modi did not introduce digital currency. https://t.co/siBxEbWJK4

Before 2014, Indians lived on trees, ate leaves and made grunting sounds to communicate. They spent their days jumping from tree to tree. Then Modi ji came in and changed all that. Now India is an advanced interstellar civilization and the undisputed leader of the galaxy. https://t.co/GcJKmL7cXb

This is how Brahmins kids would speak in class — extra confidence, great articulation, zero substance https://t.co/YMYGusWdqP

Being a student of economics I am ashamed that I still don’t know what micro economy is? And which digital currency our PM has introduced? @ActorMadhavan it’s better not to comment on a topic which you have no idea about, rather than proving yourself dumb. https://t.co/kfu5UiJn6v