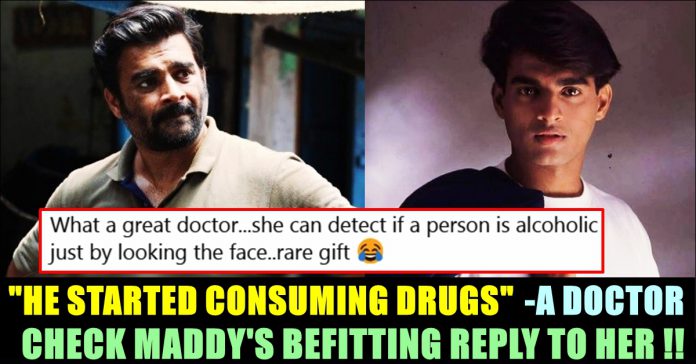 Maddy’s Reply To A Baseless Accusation Of A Doctor Goes Viral !!

Ranganathan Madhavan who is popularly known as “”Maddy”, is known among Tamil audience for acting in films such as “Alaipaayuthe”, “Run”, “Aayutha Ezhuthu”, “Iruthi Chuttru”, “Vikram Vedha” etc. His stint got recognized in Bollywood film industry as well. The actor is pretty much active in social media platforms and is currently interacting with his followers after the release of hi most recent Tamil film “Maara”, official remake of Malayalam film “Charlie”.

Actor Madhavan is making his fans super happy with his existence in social media platforms. Having around 27 Lakh followers, Madhavan is known for interacting with his followers often. The actor who made young girls to fall for him in early 2000s, is now winning hearts of them with his humbleness. Now, a reply he gave to a twitter user who accused him of abusing drugs, is going viral in social media platforms.

Most recently, bollwood supporting actor Amid Sadh who shared screen space with Madhavan in “Breathe” web series, uploaded a selfie with Maddy by writing a caption “BROTHER … MADDY SIR … you have inspired me with those ( THIRTY MINUTES) yet again … love you bro … more when we meet next”

BROTHER … MADDY SIR … you have inspired me with those ( THIRTY MINUTES) yet again … love you bro … more when we meet next 🤗 pic.twitter.com/ecyk9szr1r

On seeing Madhavan in this selfie, a twitter user came up with a tweet saying that he is ruining his career with the usage of drugs and alcohol. “Maddy was once my hearthrob. But now it’s so disheartening to see Madhavan ruining his brilliant career, health & life behind alcohol and narco drugs. While he entered b-wood in RHTDM, he was fresh as a blossoming bud. Now look at him, his face & eyes. They speak it all..!” read the comment of the user which grabbed the attention of the “Maara” actor. However, she deleted her tweet now.

Replying to this baseless statement of the woman whose bio said that she is a doctor by profession, Maddy, without losing his nerves, advised her to consult a doctor. “Oh .. So that’s your diagnoses ? I am worried for YOUR patients. May be you need a Docs appointment. .” the actor’s reply said after seeing which the commenter immediately deleted her tweet.

Here’s the reply of Madhavan :

Amidh Sadh also advised her not to misuse social media platforms. “Really … he is one of the most genuine people / artist /geniuses we have .. My heart breaks , how people miss use Twitter and the freedom of speech … I hope you learn not to make such nasty statements … About anyone ! Find peace my love !” he said in his reply.

Really … he is one of the most genuine people / artist /geniuses we have ..
My heart breaks , how people miss use Twitter and the freedom of speech … I hope you learn not to make such nasty statements …
About anyone ! Find peace my love !😇

Many other fans and followers of Maddy came in as a support to the actor. Check out some of their reactions below :

Lol from which angle is SHE looking at that pic anyway? 😂 virtual diagnosis at a whole new level, this!

Chin up bro. We know you. You rock!don’t bother about these good for nothing idiots. I have no idea how people like this can actually treat people ? Disgrace to the society and country

What a great doctor…she can detect if a person is alcoholic just by looking the face..rare gift 😂

Sir.. Although I really liked your rebuttal.. But it's best to ignore such comment as they are only made for 2seconds of fame which we just gave..